Manufactured by Boeing Commercial Airplanes, the 737 MAX 7 is one of the variants of Boeing 737 MAX family. This is one of the fastest-selling aircraft in Boeing history with a travel range of 3850 nautical miles. 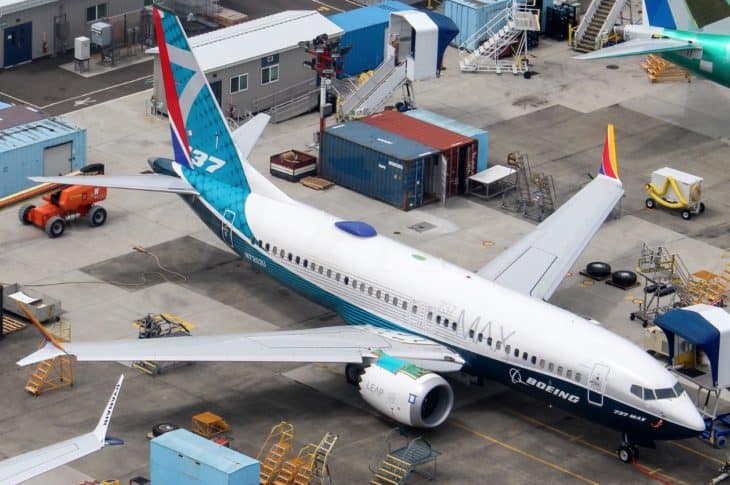 In July 2016 during the Farnborough Air Show, Boeing made an announcement on the redesign of the MAX 7, developed from the Max 8. Initially based on the 737-700, the MAX 7 can accommodate two more seat rows than the former.

On March 16 2018, the MAX 7 took its maiden flight in Renton, Washington. The aircraft flew around three hours over Washington. It landed at Boeing’s center in Moses Lake, Washington after reaching 250 knots and 25,000 feet. It completed a low final approach, systems check, and engine restart in flight.

The aircraft has a 35.56-meter fuselage length, 3.8-meter diameter and 12.3-meter tail height. In order to carry the longer length of the fuselage, the structures were strengthened, and systems and interiors were modified. The remodeled MAX 7 has the wing and landing gear of the 737-8. The wing has a span of 35.9 meters. Instead of a single-door configuration, there is a pair of over-wing exits as a means of evacuation onto the wings.

The flight deck of the MAX 7 is furnished with a Common Display System (CDS) provided by Honeywell that has six flat-panel Liquid Crystal Displays (LCD). The flight controls are equipped with fly-by-wire extended spoilers to assist with roll control and function as a speed brake on touchdown. These controls also help to attain weight reductions. The aircraft is also equipped with an anti-icing system to continuously block ice formation that will result in a clean wing, and an electronic bleed air system for enhanced cabin pressure.

The cabin has a maximum seating capacity of 172. In a two-class seating configuration, it can seat 138 to 153 passengers. The MAX 7 cabin boasts its Boeing Sky Interior for a better flying experience. It has a cabin width of 3.54 meters and height of 4.01 meters.

The MAX 7 is powered by two LEAP-1B (Leading Edge Aviation Propulsion) turbofan engines from CFM International. It has a maximum thrust of 29,317 lbf each. It provides a 15% enhanced fuel consumption, and sustains the same measure of dispatch reliability and maintenance cost. The engine is also equipped with Debris Rejection System for protection against erosion, and to prevent sand, dirt and other damaging items from getting into the core.