The Boeing B-52 Stratofortress was developed and manufactured by Boeing as a long-range, subsonic, strategic bomber that can carry a maximum of 32,000 kg of weapons with a particular combat range of above 7,600 nautical miles without aerial refueling. Since 1950, the jet-powered bomber has served the United States Air Force. The B-52 was produced from 1952 to 1962. 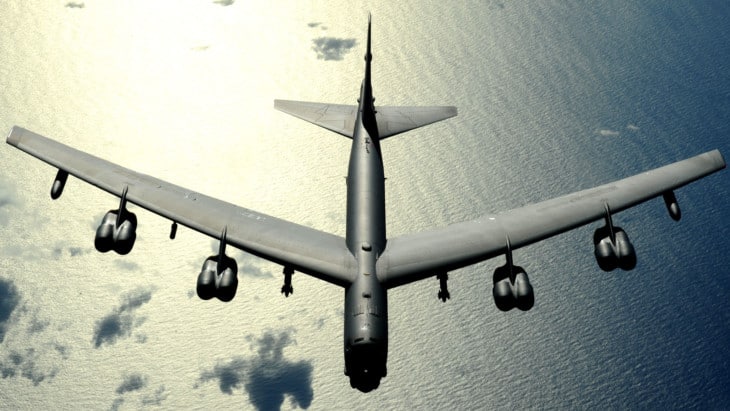 Blog posts that mention the Boeing B-52 Stratofortress:

The Boeing B-52 Stratofortress was produced from 1952 to 1962. Over its ten years in the production line, the bomber went through various improvements in design and built several versions.

The B-52H version has five crew members including a pilot, copilot, weapon system officer, navigator, and an electronic warfare officer. It has an external length of 48.5 meters, an external height of 5.3 meters, and a fuselage width of 2.8 meters. The tail height is 12.4 meters and the wheelbase is 16 meters. It has a wingspan of 56.4 meters and a wing area of 370 square meters.

The B-52H is armed with a single 20 mm M61 Vulcan cannon that was initially attached in a remote-controlled tail turret. It was then pulled out in 1991. It can also be loaded with around 31,500 kg of mixed ordnance including bombs, mines, and missiles. The aircraft features the AN/ASQ-151 electro-optical viewing system which has a low light level television sensors and a forward-looking infrared system. It is also designed with an ADR-8 chaff rocket, LITENING Advanced Targeting System, Sniper Advanced Targeting Pod, and IBM AP-101 computer.