Only 4 Boeing 747 Supertankers were built, not by Boeing, but rather, based upon Boeings 747 aircraft that were retrofitted by a company called Evergreen International Aviation to fight fires. 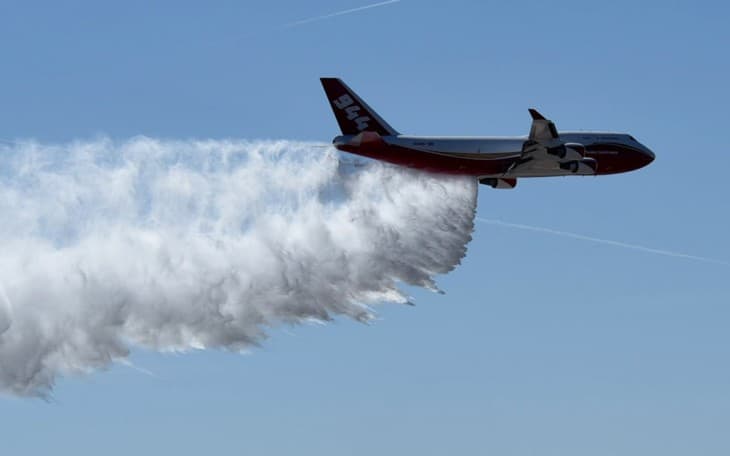 One plane many aviation enthusiasts may not be familiar with was the Boeing 747 Supertanker.

There were only 4 built, and they were not built from scratch by Boeing, but rather, based upon Boeings 747 aircraft that were retrofitted by a company called Evergreen International Aviation to fight fires.

After two older air tankers crashed during the 2002 fire fighting season the U.S. Forestry Department expressed interest in having a next-generation aircraft.

Evergreen proposed to convert up to 4 Boeing 747-200 airplanes into fire fighting systems and spent millions to convert the first 747-200 to firefighting supertanker.

The initial cost of the first 747 was $79 million for the airplane itself, plus an additional $40 million to convert it to a supertanker.

For whatever reason, the first converted aircraft, tanker number (N470EV), despite its enormous cost to the company, never went into active service.

However, the company bought a second Boeing 747, this time a 747-100 that was originally reserved for Delta Airlines, and by 2009 was leasing its services to the U.S. Forest Service.

Oddly, its first use was in fighting a major forest fire in Spain in 2009, but later on, in the same year, it was instrumental in helping the U.S. Forest Service fight a 400,000-acre fire in Oak Glen, California.

By 2013 Evergreen had substantial financial problems and filed for bankruptcy. All of Evergreen’s assets were sold to a parts salvage re-seller, and in 2017 the reseller destroyed the former, working 747-100 retrofitted supertanker.

In 2015, Global SuperTanker Services bought the fire spray system as part of the bankruptcy from Evergreen, and they used it to convert a 747-400 into a workable flying firefighter, one that still is in service today.

The existing supertanker has been used in fires in Israel, Chile, California and Colorado.

A 2017 biz journal magazine article described the airplane as having twice the capacity of the next largest aircraft.

As noted earlier, Evergreen converted the first 747-200 after the Forest Service let out a call for new airplanes. It took two years to convert and the airplane had its first flight in February of 2004.

Apparently Evergreen had problems with the sprayer system, and it was not approved by the FAA until 2006 and Evergreen decided to convert a Boeing 747-100 instead. By 2009 it was being used to fight fires.

All three of the supertankers that were produced were not originals from Boeing but were retrofitted from other aircraft.

All three supertankers were bought used and retrofitted, and including the spraying system, took nearly two years to develop, and get approval from the FAA.

When fighting fires, the supertankers primarily flew at around 160 miles per hour, delivering a swath of fire retardant 3 miles long and 150 foot wide.

Biz Journal said the converted 747-400 dispersed over 130,000 gallons or retardant in a single day when fighting a forest fire in Chile.

The converted 747-400 can spray almost twice the capacity of the next largest aerial tanker and can adjust the spray according to firefighting needs.

The existing and functional supertanker has 4 General Electric CF6-80C2B1F engines that produce over 57,000 pounds of force each, and allow the airplane to take-off with a weight of up to 910,000 pounds and fly at a ceiling of 46,000 miles per hours.