As of 2018, sources indicate that two are being flown by Mahan Airlines, a privately owned Airline in Iran, one is owned by the Saudi Government for shuttling VIPs, and one, a Boeing 747-300SF is used in Belarus to shuttle freight. 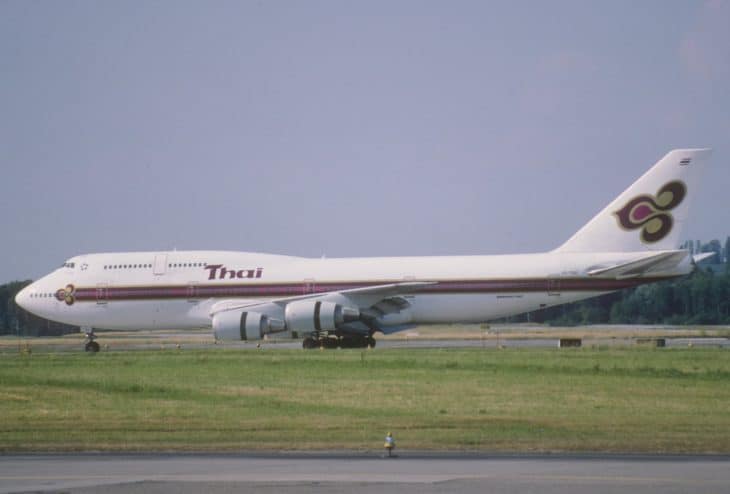 Like the previous versions of the 747, the 747-100 and the 747-200, Boeing’s 747-300, of which 81 were built, are hard to come by. Sources indicate that two are being flown by Mahan Airlines, a privately owned Airline in Iran, one is owned by the Saudi Government for shuttling VIPs, and one, a Boeing 747-300SF is used in Belarus to shuttle freight.

However, by the mid to late 80s, many airlines who bought the larger 747-300s, traded them for smaller airplanes that could land in smaller hubs worldwide, rather than be dependent on just landing at airports such as Tokyo or Sydney.

Essentially having most of the same features as the Boeing 747-200, the main distinguishing mark of the 747-300 was its upper deck. This upper deck housed up to 59o passengers and gave the airplane its distinctive hump.

This hump was 23 foot in length and was available in other Boeing 747 models, however they had the upper deck only as a retrofit.

There were three possible seating designs with 747-300. The plane contained 589 passengers if they were all designated as a single class. If there were two classes, the airplane seated 496, and if the airline chose to make three classes, it seated
412.

One significant difference is that to get to the upper deck, the traditional spiral staircase that had room for a lounging area was eliminated, and the first-class passenger seated in the upper deck went directly to their seats.

Depending on the model and production date, the 747-300 used 3 different types of engines. The original was the andPratt and Whitney JT9D-7 engines. Then, later on, Boeing came to an arrangement with both General Electric and Rolls Royce to produce engines for the 747-300.

The aircraft could take off with 750,000m pounds fully loaded, and go as fast as 600 miles per hour. The ceiling rate was the same as the previous models, 45,000 feet.

Although occasionally used for troop carrying the 747-300 was primarily used for carrying freight, shuttling VIPs, or carrying passengers. Over 22 airlines used them as passenger shuttles.