The Boeing 737-300 are a series of narrow body airliners that were first produced by Boeing commercial airplanes in 1979. They are from the second generation of the 737 series and the first commercial model took flight very of 1984 entering service in December of that year commercially. 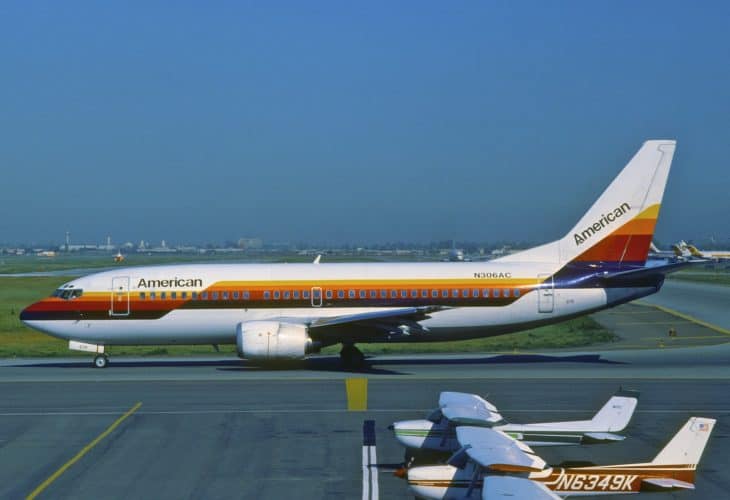 After the commercial success of the first generation of the Boeing 737’s the company decided that they would pursue a similar model with increased capacity and range. To achieve this goal they would optimize the planes with modern specifications but also retain as much commonality as possible with the first generation 737 signs.

At the Farnborough air show the very first public display of the second generation was made featuring the CFM 56 turbo fan engines. These engines were able to improve fuel efficiency significantly and also reduce the noise production.

However the engines led to an engineering problem due to the low ground clearance of the 737 frame. In order to solve the state put the engine in front of rather than below the wing and move the engine accessories to the side of the engine pod creating a noncircular air intake.

the design on the 737 300 was kept in line with the previous generations 737 200 for the most part. A number of small changes in the wing created improved aerodynamics. For example the wingtip was extended 9 inches.

The trailing edge flaps and leaving edge slats were both adjusted. Various other small changes were made to the interior to improve comfort ability similar to those made for the Boeing 757 as well.

In the spring of 1981 to US airline companies ordered 10 of the 737 – 300 series a piece with an additional option for 20 more. In February 1984 the first finished craft from that production series took flight.

The CFM56–3 engines were chosen to power the 737 – 300 series of aircraft. Modifications had to be made in order to accommodate the size of these engines to the frame of the aircraft along with several modifications to the engine as well. The diameter of the fan was reduced lowering the bypass ratio. This led to a reduction in the overall thrust from 24,000 to 20,000 lbf.

The 737 – 300 was the first Boeing craft which featured the use of Speed Trim System. This is a notorious flight augmentation system that automatically adjusts the stabilizer when the aircraft is flying at a low speed with low weight and when the craft is at high thrust without autopilot engaged. This is a little unusual because it is not typical for a single channel design system to be used for augmentation systems that have full control over the stabilizers.

As recently as the end of 2017 only 62 reported whole losses of the Boeing 737 series have been reported. This limits fatalities to only 1176. This is shown by an analysis from Boeing over the time. 1959 to 2017 which showed that the 737 – 300 series only had a whole loss rate of 0.71 per million departures in comparison to 0.17 for the next generation series and 1.75 for the original series.