The Cessna 414 Chancellor is a light, pressurized, twin-engine transport aircraft with a pressurized cabin in service since 1969. It is a less powerful and lighter evolution of the Cessna 421. 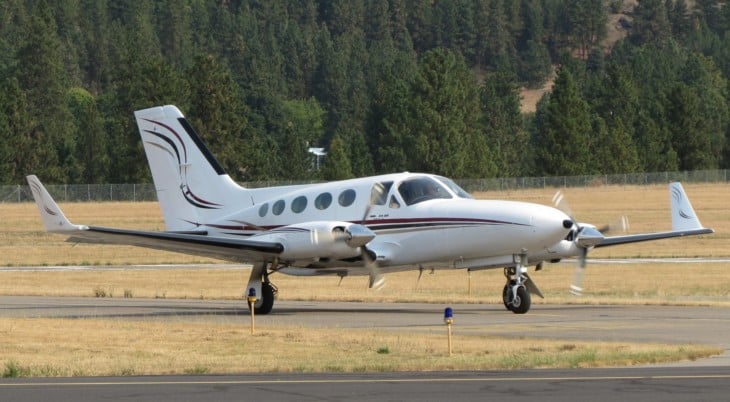 On November 1, 1968, the prototype registered N7170C, conducted its maiden flight. Production aircraft were accessible in several optional seating configurations and avionics packages. The aircraft was labeled the Chancellor in 1976. In 1978, an enhanced version was launched, designated as the 414A Chancellor. It featured major modifications, including a restructured and increased wingspan, incorporating integral fuel tanks, and a stretched nose to allow more space for baggage. The Cessna 414 Chancellor was produced from 1968 to 1985.

The original 414 was developed out of the fuselage of the Cessna 421 and of the wing of the Cessna 401. It has an exterior length of 11.1 meters, a height of 3.5 meters, and a fuselage diameter of 1.5 meters. The wingspan is 13.46 meters, the wing area is 20.97 square meters, and the wheelbase is 3.3 meters. The 414 is a low-wing cantilever monoplane with a conventional tail section and a retractable tricycle undercarriage. The cabin length is 3.5 meters, height is 1.3 meters, and width is 1.4 meters. The aircraft can seat up to eight passengers and one or two crew.

The aircraft is powered by two Continental TSIO-520-NB piston engines. This piston engine is a six-cylinder, horizontally-opposed, direct drive, turbocharge, air-cooled, and fuel-injected type that produces a maximum thrust of 310 horsepower each. The fuel system composed of a pair of main tanks and fuel selectors, emergency cross-feed shutoff valves, and other crucial parts to complete the system. The two main tanks were essential sections of the sealed wet wing. Auxiliary fuel pumps were placed outside the tanks, while the fuel flow gauge together with the fuel quantity gauge and the fuel low-level warning light is in the cockpit. The aircraft also featured a 28V, negative ground, direct current electrical system charged by an alternator on each engine, and a 24V battery.

The aircraft has a maximum takeoff weight of 3,061 kg and a maximum landing weight of 2,697 kg.