The Cessna T-37 Tweet is a small, economical twin-engined jet trainer aircraft which has been in service for decades as the main trainer for the United States Air Force (USAF) and in the air forces of numerous countries around the world. 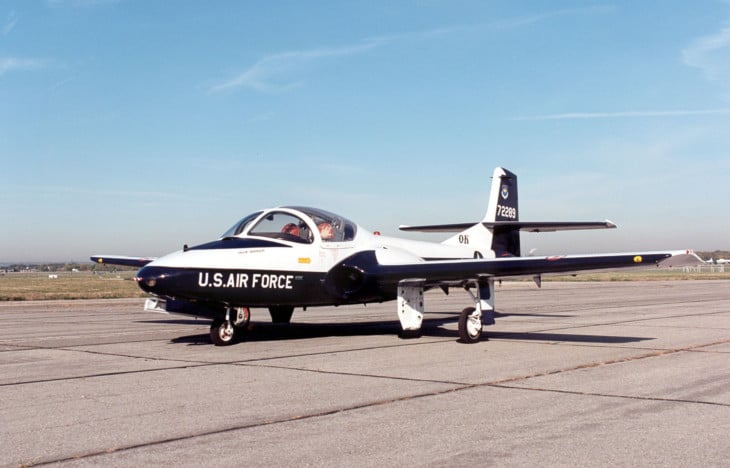 In late 1952, the United States Air Force issued a request for proposal for a Trainer Experimental program, which was for a two-seat trainer that would introduce USAF students to jet aircraft. The design requirements composed of a lightweight aircraft with an empty weight of 1,814 kg in order to control the cost and intricacy of the trainer.

It also included the aircraft’s capability to handle twenty take-offs and landings in a span of two hours, flight handling features that could match those of the latest and innovative fighters, a service ceiling of 35,000 feet with enough high-altitude maneuverability to entirely familiarize students, and a 113-knots maximum traffic pattern speed to guarantee better handling characteristics during low speeds. There is also a side-by-side seating configuration for the instructor and student.

On October 12, 1954, the first prototype designated as the XT-37 conducted its maiden flight. It has a low and straight wing and powered by two Continental YJ69-T-9s engines which were mounted in the wing roots. It is also equipped with ejection seats and a tricycle undercarriage with a wide track of 4.3 meters. The wide track and a steerable nose wheel made the XT-37 uncomplicated to operate on the ground.

The production T-37A was almost the same as the XT-37 with minor modifications to address the issues found in the flight-test program. In September 1955, the first T-37A was completed and took its first flight later that year. The aircraft was very noisy because of the air intake into its small turbojets that exhaled a high-pitched shriek or like a piercing whistle. For that reason, the T-aircraft was labeled as “Tweety Bird” or just “Tweet”. The USAF acquired 444 T-37As, with the last aircraft produced in 1959.

The T-37B is an improved version outfitted with two J69-T-25 turbojet engines and enhanced navigation and communications equipment. The T-37C is a light-attack version with weapons pylons under each wing.