The T303 Crusader is an all-metal, low-wing, six-seat, twin-engine aircraft produced by Cessna. It started marketing in 1982 and was likely one of the most extensively evaluated and most outstanding flying twins that ever produced in the Wichita factory. 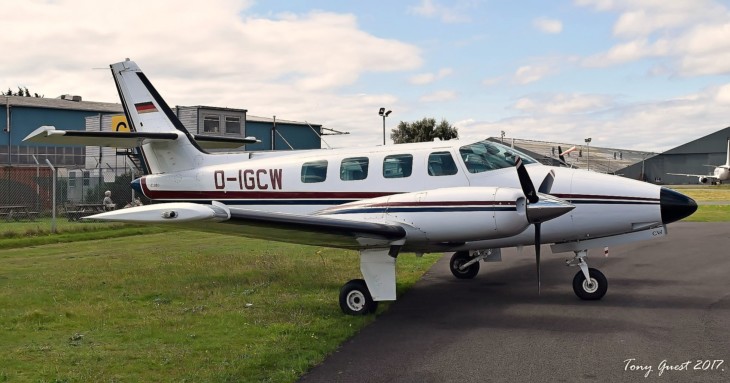 On October 17, 1979, the newer model T303 Crusader took to the skies for the first time. Two years after, initial deliveries of the aircraft started. The Crusader is an uncomplicated aircraft to fly. The only thing that pilots usually bring up is pitch control all over the entire flight envelope. The Crusader has an exterior length of 9.27 meters, a tail height of 4.06 meters, and a fuselage diameter of 1.4 meters. It has a wingspan of 11.9 meters and a wing area of 17.58 square meters. The fuselage diameter is 1.4 meters.

Entry into the cabin is comparably simpler than those low-wing six-seat light twins of its kind. The T303 Crusader is equipped with air stairs, providing it more of a corporate jet ambiance. The aircraft has a cabin length of 2.8 meters, and a height and width of 1.25 meters. The spacious cabin is designed with seats in the club configuration and a stowaway table. The cockpit can be isolated from the cabin using a small curtain. The large cockpit allows better visibility with the wraparound windshield.

The T303 Crusader is powered by two six-cylinder, horizontally opposed Continental TSIO-520AE piston engines. Each engine has a rated thrust of 250 horsepower. The engine components include an overhead valve train, a TCM fuel injection, and an air-cooling system. It is also equipped with a three-blade constant-speed, counter-rotating McCaulley propellers, removing all crucial engine limitations for single-engine operations.

With a maximum fuel capacity of 150 US gal, the aircraft can last for more than five hours. However, with a useful load of 836 kg, full wing tanks will only leave 371 kg for passengers and cargo. The aircraft cruises nearly 170 knots with an average fuel consumption of 25 US gal per hour. It will climb around 1,000 feet per minute at sea level on a typical day and average load and can fly up to 25,000 feet. The maximum takeoff weight is 2,336 kg and the maximum landing weight is 1,635 kg.