Through the years, many different types of aircraft propellers were experimented with. Some more successful than others. Find out some of the most common types of propellers in aircraft and learn the differences between each of them.

The device that converts rotational energy generated by the engine or any other mechanical source into propulsive force is called a propeller. Propellers are an essential part of the aircraft as without them an airplane cannot fly.

These propellers are designed to provide the best efficiency at forwarding speeds. They fit a specific set of conditions of both engine and airplane speed. Any change in those conditions reduces both the propeller and engine efficiency. Fixed-pitch propellers are used on airplanes of low speed, power, altitude, or range.

Many single-engine aircrafts have fixed-pitch propellers installed on them and the advantages they offer include simple operation and less expense. These propellers don’t require control input from the pilot during the flight.

Wooden fixed propellers or wooden propellers are hardly found in the aircrafts of today, but they were widely used before the introduction of metal propellers. These propellers were built layer by layer with specially prepared wood. Black walnut wood, sugar maple wood, yellow birch wood, and black cherry wood were most commonly used in the making of these now vintage wooden propellers.

The first metal propellers were used in the aircrafts for military operations during 1940. These propellers were made using incredibly strong and durable aluminum alloy. The metal material used in the making of these propellers was treated to enhance its properties and make it less prone to warping from damage due to heat or cold. Today, it is hard to find an aircraft propeller made of anything but metal.

There is no way to change the blades’ pitch during the flight to meet variable requirements, which is one of the reasons why ground-adjustable propellers aren’t used in modern aircraft.

However, the number of pitch positions is limited – the pitch might be adjusted to angles between the maximum and minimum pitch settings of the propeller. With controllable-pitch propellers, it is possible to attain a particular engine rpm to meet specific flight conditions.

Constant-speed propellers speed up when the airplane dives and slows down when it climbs due to the changing load on the engine. To ensure that the propeller provides an efficient flight, the pilot tries to keep the speed as constant as possible. The mechanism that allows a constant-speed propeller to work is known as propeller governor. A propeller governor senses the aircraft engine’s speed and changes the blade angle of the propeller to maintain a specific rpm regardless of the aircraft’s operational conditions.

When the aircraft goes into a dive, the propeller’s blade angle increases, preventing overspeeding and so the power output doesn’t change – since there is no change in throttle setting.

If the plane’s throttle settings are changed instead of changing its speed by diving or climbing, the propeller’s blade angle decreases or increases as required to maintain a constant rpm. The power output of the engine changes in accordance with alterations in the aircraft’s throttle setting.

The pitch-changing mechanism of a constant-speed propeller uses a piston and cylinder arrangement and is operated hydraulically using oil pressure. Either cylinder will move over a piston or the piston will move in a stationary cylinder. The piston’s linear motion is converted into rotary motion by different kinds of mechanical linkages to change the propeller’s blade angle. Gears may be used for the mechanical connection – the pitch-changing mechanism responsible for turning each blade’s butt. A bearing is mounted on each blade that allows them to rotate to change the blade angle.

The governor used for controlling pitch-changing mechanisms of a propeller is connected to the crankshaft of the aircraft’s engine and responds to changes in the engine rpm. When the rpm increase above its set value, the governor causes the pitch-changing mechanism of the propeller to increase the angle of the blades. The change in angle puts increased load on the aircraft’s engine and the engine rpm decrease.

When the engine rpm decreases below the specific value of the governor (for which the governor is set), then the governor causes the pitch-changing mechanism of the propeller to decrease the angle of the blade. This decreases the load on the engine thereby increasing the rpm. In this manner, the governor tends to keep rpm constant.

In a constant-speed propeller, the control system automatically adjusts the pitch with the help of a governor to maintain a preset engine rpm. So pilot’s attention isn’t required to adjust the pitch of the propeller.

For example, if the speed of the engine increases, an overspeed condition will occur and the propeller will need to slow down. The governor automatically increases the propeller’s blade angle until the desired rpm has been established. Good constant-speed propellers respond to small variations to ensure that a constant engine rpm is maintained throughout the flight.

The propeller blade is rotated to an angle parallel to the line of flight to greatly reduce the drag on the airplane. When the blades become parallel to the airstream, aircraft’s propeller stops turning and windmilling is minimized.

In the majority of small feathering propeller, oil pressure is used to decrease the propeller’s blade angle while blade flyweights, compressed air, and springs are used to increase the blade angle.

Latches lock the aircraft’s propeller in the low blade angle as it slows down at engine shutdown. Latches can be external or internal and are located inside the propeller hub. Centrifugal force holds the latches off their seat during a normal flight to ensure that they don’t stop the blades from feathering.

Reverse-pitch propellers are controllable propellers whose blade angles may be changed to a negative value in-flight. The purpose of a reversible pitch is to create a negative blade angle to produce thrust in the opposite direction. Propeller blades may be moved to a negative pitch after the plane has landed to make it come to a complete stop. As the blades of the propeller move into a negative angle, the engine power increases negative thrust. This slows down the aircraft aerodynamically and reduces ground roll. Reversing the propellers quickly reduces aircraft speed after touchdown and minimizes brake wear.

The Hercules C-130, with its constant-speed fully feathering reversible propellers is able to reverse using reverse pitch as you can see in the video below (toward the end of the video). 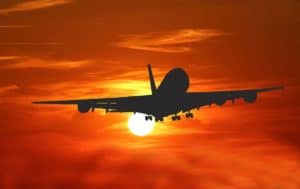 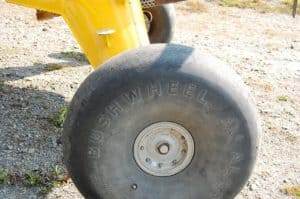 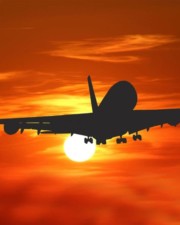 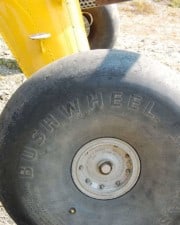