Balanced Short Range Passenger Turboprop: The Antonov An-140. A powerful twin-engine cargo or passenger aircraft, the Antonov An-140 was designed for regional use. Originally designed to replace the An-24, this powerful aircraft has an extended cargo capacity and is a great option on unprepared landing strips. 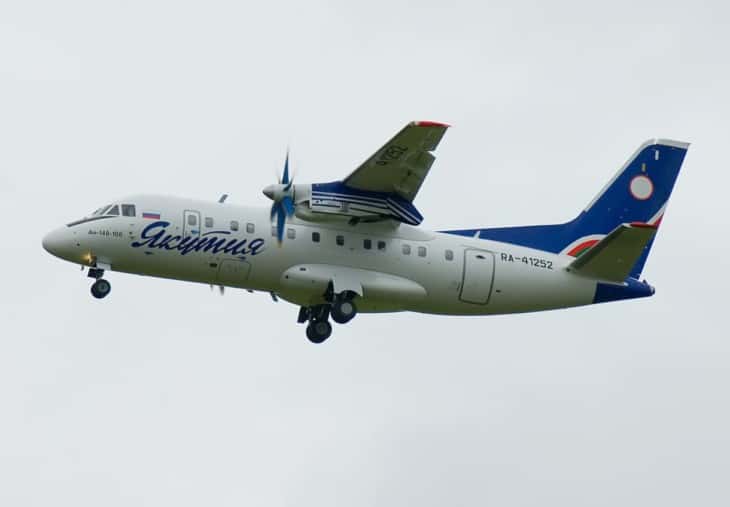 This powerful airplane was designed to replace the An-24, but quickly became a popular aircraft in its own right. It has a number of variants, making it an incredibly versatile plane and one that has a number of uses.

One of the variants, the An-140-100 is a military version. It was created in 2003 and has a higher take-off weight, longer range, and longer fuselage, making it ideal for maritime patrol and more.

A freight model is the An-140T. This powerful aircraft has a TV3-117-SBM3 engine and was developed by the Russian Navy.

There is another version of the An-140 that is was very popular until a crash. This was the HESA IrAn-140 built in Iran from kits supplied by the company. Thirteen aircraft were to be constructed each year.

Development of this aircraft began in 1993 in the Ukraine. They made three different prototypes of the An-140. The first prototype had its maiden flight in late 1997 and was entered into service two years later. In 1998 the second prototype was introduced.

By the end of 2004, there were two prototypes as well as eight production aircraft released.

Multiple customers have placed orders for this powerful and durable plane. Some of the most popular customers include Motor Sich, Antonov Airlines, Air Libya Tibesti, Ilyich-Avia, and the Russian Ministry of Defense.

In May 2011, the Russian Air Force ordered seven of these great planes from the Ukraine. As of mid-2013 there were 25 An-140 aircraft currently in use. They were being used for military, police, and civil operations, and the company had an additional 19 orders for more planes.

Safiran Airlines and Azerbaijan Airlines both had the An-140 in operation, but after they each lost one of these planes to crashes, they cancelled future orders with the company.

This conventional plane can be used in both light and dark conditions and in terrible weather without problems. It features an AI9-3B auxiliary power unit that is located at the tail of the fuselage. This allows the plane to easily take off and land on all airstrips, regardless of their quality.

There is space in the flight deck for both a pilot and a co-pilot. A voice cover recorder, distance measuring equipment, weather radar, magnetic compass, automatic flight control system, and more ensure safety at all times.

Designed for comfort, the An-140 features a large and spacious cabin that offers plenty of room for all of the onboard passengers. There is space for 52 passengers sitting four in a row. With three different and clear zones, passengers can easily find the right spot for them.

There are 26 seats in economy, 22 in business, and just four seats in the exclusive lounge.

Additionally, there is plenty of room for cargo below the cabin and in the fuselage.

Powerful twin TV3-117MVA-SBM1 turboprop engines power the An-140. They work with a pair of six-bladed propellers. Each of the two engines can easily produce 1838 kW of power and are made by Ivchenko Progress Zaporozhye, Klimov Scientific Industrial Enterprise, as well as Motor Sich.

The dry weight of each engine is 570 kg.

This powerful plane can easily climb at an impressive rate of 6.8 m/s. It has a maximum speed of 575 km/h and a cruising speed of 460 km/h. Thanks to the maximum range of 1380 km and a ferrying range of 3680, this aircraft has a lot of different applications.

Like other similar aircraft, the An-140 has powerful tricycle landing gear. There are low pressure tires to ensure that the landing gear is durable and long lasting.

This powerful landing gear ensures that the aircraft can both take off and land without problems and offers plenty of brake performance, support and durability.

There are a few different aircraft that are considered to be the direct competition of the An-140. One of these is the French ATR 42. All of the Bombardier Dash 8 series planes are also competition, as is the Russian Ilyushin Il-114.