From small planes that are used for stealth missions to huge planes used to transport cargo and soldiers, military planes tend to capture people’s imagination. This is a guide on the different types of military airplanes in use today.

When you think of the armed forces, what is the first thing that comes to mind? Is it the various occupations they offer? The fact that they’re protecting the country 24/7? Or, is it some of the exciting equipment they get to utilize, such as airplanes and helicopters?

Let’s face it, when it comes to airplanes and helicopters, the military is heads and tails above everyone else because they truly offer planes of all sizes and types. Military planes are used for a variety of purposes and have a lot of designs, and if you have an airplane obsession, these are the types of planes to study.

Ever since the 1780s when the first practical airplane was put into use, the military has had an honored tradition of adopting the latest advancements and designing aircraft for themselves that can help them accomplish their goals. They started with hot-air balloons and hydrogen balloons, and they haven’t stopped since.

As a matter of fact, the military owns airplanes that are unlike commercial or private planes of any type, and since they come in a variety of sizes and functions, not to mention designs, you can literally spend weeks or even months studying the various military planes in use today.

When you’re researching the types of military aircraft, they are normally broken down into types that have to do with time periods in history.

While this article looks at the types of military planes, we another article specifically going into all the different types of military helicopters. It’s worth checking out if you have an interest in military aviation.

Military transport planes are used mostly to transport other aircraft, equipment, and even personnel from one location to another. Many times, cargo is loaded onto pallets first to make it easier to load and unload.

Other times, cargo is dropped from the planes on parachutes, which means the planes don’t even have to land. Aerial tankers are transport planes that refuel other planes while in the air.

Although some people call these cargo planes, that is technically incorrect because they also carry paratroopers and other military personnel.

Other military transport planes include gliders that can deliver personnel and equipment to places that are difficult to land in, including out-of-the-way landing strips.

Military planes used for fighting purposes are there mainly for destroying enemy aircraft while still in the air. These planes use both defensive and offensive counter air operations to complete their mission, although there are fighters who can also accommodate ground attacks.

On these types of military airplanes you’ll find a wide variety of military weapons, including machine guns, rockets, bombs, cannons, and guided missiles, depending on the mission’s purpose.

Today’s fighters are also able to fight the enemy from long distances, often before the enemy is able to detect or see them.

Some of the more well-known military fighter planes include the F-15 Eagle, Su-27, and the Lockheed Martin F-22 Raptor.

Fighter planes must have excellent maneuverability, speed, and a smaller size than other types of combat aircraft to be effective at their jobs.

Maritime patrol airplanes used by the military are fixed-wing planes that are made to operate for very long periods of time over water in specialized roles.

These roles include search and rescue, anti-ship, and anti-submarine missions. In fact, many patrol airplanes were made just for this purpose, including the Kawasaki P-1 airplane.

This plane has no civil counterpart, but is made just for the military and these types of missions.

Some of the other types of maritime patrol aircraft are modified designs of aircraft already in existence and not developed just for this purpose.

These planes include the Boeing P-8 Poseidon – a plane that resembles a modified Boeing 737-800 airliner.

Some other names for maritime aircraft are maritime reconnaissance aircraft, patrol aircraft, and even patrol bomber, which is an old term for this type of plane.

Military bombers are heavy, large, and less maneuverable than aircraft used for fighting. They can carry a wide variety of military weapons, including cruise missiles, bombs, and even torpedoes.

Used mostly for ground attacks, military bombers are neither fast nor agile and, therefore, they are unable to face the enemy head on. Military bombers can have a single engine and one pilot or two or more engines and several crew members.

Some military bombers even have stealth capabilities, including the Northrop Grumman B-2 Spirit. This makes them difficult to be detected by enemy radar. Other examples of these planes include the B-52 Stratofortress and the World War II B-17 Flying Fortress.

There are also many types of bombers, including light, medium, and heavy bombers, torpedo bombers, and dive bombers. The Junkers Ju 88 and the Tupolev Tu-16 Badger are other examples.

The Soviet plane known as the Ilyushin II-2 Shturmovik, as well as the Douglas AC-47 Spooky and Lockheed AC-130 are examples of attack aircraft. The AC-47 and AC-130 have even been armed with sideways firing weapons used for ground attacks.

Military attack planes are usually placed quite a distance behind enemy lines to strike their targets, and they carry out these airstrikes with better precision than bombers do.

In the past, these planes have been called attack bombers or strike aircraft, among other names. Examples of these types of planes include the North American B-25G Mitchell and the de Havilland Mosquito Tsetse.

As you can guess, military planes used for reconnaissance and surveillance purposes are mainly used to gather intelligence.

Equipped with cameras and special sensors, these planes can be modified or specially designed to complete their mission.

These days, many of their functions are being completed with either unmanned aerial vehicles (UAVs) or even satellites. They can use various radars and certain sensors for these tasks.

These types of planes, in fact, use a variety of different equipment and techniques for tasks such as maritime patrol, battlefield surveillance, artillery spotting, and even airspace surveillance.

In addition to UAVs, reconnaissance planes can include civil aircraft designs that are modified to suit the task at hand and moored balloons.

Nowadays, these plans can participate in both general intelligence gathering and real-time surveillance.

Usually a fixed-wing airplane, multirole airplanes can accommodate more than one task, including fighting and bombing capabilities. Their specific duty depends on what is required in the mission, and they are actually quite common in today’s military.

Examples of military multirole airplanes include the Eurofighter Typhoon, the Dassault Rafale, the Saab JAS-39 Gripen, and the Junkers Ju 88.

Some are known as swing role planes because they can switch roles quickly within the same mission, usually with only a very short notice.

Some of their missions include air interdiction, close air support (CAS), and suppression of enemy air defense (SEAD).

An airborne early warning and control, or AEW&C system, is a radar system that detects ships, ground vehicles, and aircraft and takes control of the battle space by directing aircraft and fighter strikes.

They can carry out surveillance over air or ground targets and even perform functions similar to an air traffic controller. They use radars to determine the difference between enemy and friendly aircraft.

Some of the military planes used for this work include the Lockheed EC-121 Warning Star, the Fairey Gannet AEW.3, and the Northrup Grumman E-2 Hawkeye.

They can be used for both offensive and defensive operations. For example, they can direct fighters to their target locations and counterattack enemy forces both on the ground and in the air. They are also used by both the Air Force and the Navy.

If the military wishes to test advanced structural, avionic, aerodynamic, or propulsion concepts, it uses military experimental airplanes to do so.

These are planes with highly technical and advanced instrumentation and are usually planes which have not yet been fully proven in flight. The term includes most homebuilt aircraft and planes with conventional designs.

The Bristol 188 is one example of an experimental aircraft, as are England’s de Havilland DH-108 Swallow and Avro Ashton, the U.S.’s Bell X-9 Shrike guided missile and Schweizer X-26 Frigate sailplane, and Russia’s Sukhoi T-4 and Kozlov PF.

Military planes used for electronic warfare, or EW, include the Boeing EA-18G Growler and the Boeing F/A-18F Super Hornet.

These airplanes participate in all aspects of EW, including degrading the effectiveness of the radar and radio systems used by the enemy.

The planes are usually developed by taking an existing plane and modifying it to meet the needs of the mission.

Other examples of this type of plane include the Mi-8PP in Russia, Brazil’s Embraer R-99, the Lockheed EC-130H Compass Call in the United States, and China’s Shenyang J-16.

Some of the ways they destroy the effectiveness of the enemy’s communication methods include radar-jamming and several other methods based on deception. 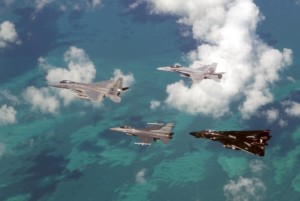 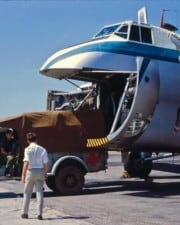