Hey, who are you calling heavy? While all pilots like to treat their aircraft like the ladies they are, thankfully planes are much more accepting of bluntly descriptive language.

What Does “Heavy” Mean?

Aircraft are classified based on their maximum takeoff weights (MTOW). A “heavy” aircraft is one whose takeoff weight is more than 300,000 pounds, or 136 tonnes.

This designation is critical enough that the FAA requires all such aircraft to announce the fact with their call sign.

For example, British Airways Flight 101 (radio call sign “Speedbird”), a Boeing 747, would refer to themselves as “Speedbird One-Zero-One Heavy” in all ATC communications.

The Importance of Aircraft Call Signs

When small aircraft speak with ATC, they generally refer to themselves by aircraft type. A Cessna 172 Skyhawk calls themself “Skyhawk…” followed by their registration number. Each type of aircraft has a specific call sign to go by, so that air traffic control and other pilots know the approximate size and speed of the aircraft calling. They also know what to look for when looking out the window.

Even when not communicating with ATC, pilots use their call signs for the same purposes at non-towered airfields. When no controller is present, pilots self-announce their location and intentions blindly on a designated frequency for that airport. The frequency is known as the CTAF, or the common traffic advisory frequency.

Even without the help of a controller, knowing the type of airplane the pilot is looking for is a big help. If a pilot is waiting to take off at an uncontrolled field, and they hear the call, “Field traffic, Learjet four-five alpha on a one-mile final,” they know they need to hold short. It won’t take but a few seconds for a Learjet to cover one mile, since the approach speed in these aircraft is well over 130 knots.

But if they hear the same call from a different aircraft, for example, “Field Traffic, Skyhawk six-nine on a one-mile final for runway 09,” they know that that aircraft will take quite a while to reach the runway since the Cessna’s approach speed is likely 65 knots or less. They likely have more than enough time to take off and do not need to wait.

Traditionally, airlines have used their company names or customized titles as their call sign. This helps pilots know which airplane is which at very busy airports. Airlines tend to operate at major airports, where a call sign like “Boeing” or “Airbus” would not be very descriptive at all.

Additionally, airlines use their flight numbers instead of their tail number for air traffic control communications. The aircraft type and registration numbers are always filed on the flight plan, so if this information is relevant in some way, the controller can quickly look it up.

By using the flight number, airlines can make equipment changes easily should the need arise. From the business standpoint, the flight number indicates everything from the flight passengers should board to the departure, destination, and times. Using that for communications reduces confusion.

Most call signs are pretty obvious and directly related to the companies name. Some are hold outs by tradition or company lore. The coolest ones just sound great on the radio, like British Airways “Speedbird,” China Airlines’ “Dynasty,” or Aer Lingus “Shamrock.”

The point is that other pilots can learn a lot about the other planes in the sky just from an aircraft’s call sign. Radio communications are all about being as quick and succinct as possible, so one little word can mean a whole lot. As such, airplanes can add descriptive notes that other pilots need to hear.

Planes are categorized by their maximum takeoff weight. The categories used by the FAA are as follows.

Super is reserved only for the largest airplanes. There are only two types of “super” aircraft operating, the Airbus A380 and the largest plane of them all, the Antonov An-225 cargo plane. Both of these planes have takeoff weights well above 1 million pounds!

Some airplanes get special consideration. By weight alone, the Boeing 757 is not a “heavy” aircraft. But this design produces an abnormal amount of wake turbulence. To maintain a safe separation from other aircraft, B757s are also required to use the “heavy” callout.

Pilots of “heavy” and “super” aircraft are required to announce their category at the end of their call sign. This helps ATC and reminds everyone that these airplanes need more space than other categories.

The Dangers of Wake Turbulence

As an airplane’s wing moves through the air, a wake is produced behind it, just like the wake of a boat moving through water. And just like some boats make bigger wakes than others due to design and speed differences, the wake behind airplanes changes during various phases of flight.

Wake turbulence refers explicitly to a spiral swirling of the air that occurs at the wingtip. As the relatively higher air pressure area below the wing attempts to equalize with the lower pressure above, near the wingtips, it takes on a spiral motion towards the aircraft.

It should be noted that wake turbulence is not the result of the airplane’s powerplant. Jets produce a powerful jet blast that is very hazardous to nearby aircraft on the ground. Even at low power, jet blast can topple light training aircraft. The prop wash from propeller-driven airplanes can also cause damage. But this turbulence is short-lived and remains close to the aircraft, generally much closer than anyone would ever operate to another plane in flight.

The hazard for the following aircraft lies in the spiral vortex of the wake turbulence. If a plane unknowingly enters the vortex, it will induce a much stronger roll than the airplane’s flight controls can correct. A smaller plane that enters the wake turbulence of a larger aircraft is likely to wind up flying upside down!

The most dangerous phase of flight for this to happen is obviously during takeoff and landing. When near the ground, the roll caused by wake turbulence can topple a small aircraft and crash it back to earth. Understanding wake turbulence and how to avoid it is a critically important part of all pilot training.

A plane generates stronger wake turbulence any time is is operated at higher angles of attack. Pilots often learn that the most extreme wake turbulence is encountered behind airplanes that are operating heavy, clean, and slow. In this context, “clean” means without the flaps being extended.

You can read more about wake turbulence and its effects in the FAA’s Advisory Circular Aircraft Wake Turbulence.

For a look at how wake turbulence can affect even the biggest of planes, check out what happened onboard a Qantas A380 that wound up right behind a sistership.

Air traffic controllers also know the importance of keeping airplanes far enough apart that their wake turbulence will not affect each other. The primary way they do this is based on their weight categories.

Below is a table produced by the FAA showing how many miles of separation is required between airplanes of various categories. This is used by radar controllers who are required to maintain separation. Sometimes, the separation can be reduced if the controller gives a “caution, wake turbulence” advisory to the trailing pilot.

2. Also, separation, measured at the time the preceding aircraft is over the landing threshold, is provided to small aircraft:

At airports, controller time takeoffs and landings based on elapsed time rather than nautical miles of separation. Wake turbulence will dissipate naturally over time, and wind can also blow the turbulence away from the runway.

If the time is close, a controller may issue a takeoff or landing clearance with a “caution, wake turbulence” advisory. It is then up to the pilot to identify a path that will result in a safe takeoff and departure or approach and landing.

The Real Purpose of “Heavy” and “Super” Call Signs

The larger and heavier an aircraft is, the more hazardous their wake turbulence is. For this reason, Heavy and Super category airplanes need to call out their size on the radio for two reasons.

Firstly, doing so reminds the air traffic controllers of precisely what the plane looks like and how much space they need to give it. Remember, controllers are mostly in dark rooms looking at radar screens. All planes look the same on a radar screen.

And finally, making the announcement with every call serves as a warning to other pilots who might be flying in the same area. If a pilot hears a heavy or super aircraft landing or departing a runway ahead of them, they know to give it a wide berth. 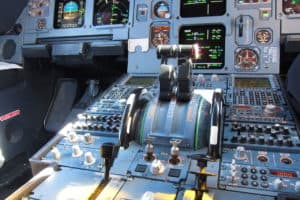 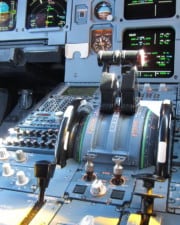