One Of The Fastest Business Jets, The Cessna Citation X 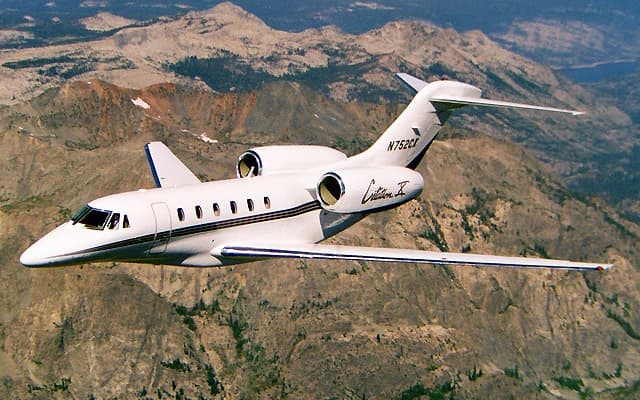 The Cessna Citation X is the biggest existing member of the Citation family from Cessna, not only that – the Citation X is also the third fastest civilian aircraft in the world, well actually the Concorde and Tupolev Tu-144 were faster, but they  are no more produced .
The Citation X is a long ranger specially designed for transcontinental flights , the whole design objective was to fit in a trans Atlantic range with in a mid size package that can travel faster than any other aircraft in the world, and we must say that they have well succeeded. Due to its high cruise speed which is from 150 to 200 km/hr faster than all other civilian jets this Citation according to Cessna can save passengers about an hour . Say for example flying from New York to Los Angeles will take the Citation X 4 hours and 10 minutes compared to 5 hours on other similar or larger business jets.
The Cessna Citation X uses Allison AE 300 7A engines – equipped with FADEC with gives it the capacity to run at 703 miles per hour making it one of the fastest modes for civilian transport. A very important feature in the Citation X is the large diameter of the engine intakes which is related to the high bypass ratio turbofans. Pumping out 6700 lbf per engine the Rolls Royce engines are really very very powerful for a jet of the size of the Citation X, and we should not forget to mention here due to usage of many advanced features the engines are also distinctly quieter than any other comparable private jet airplane. The engine has solid Titanium blades and 3 stage low pressure turbine and benefits the fuel economy and engine noise through its 5 to 1 bypass ratio.
Though the Citation X borrows its fuselage design from the previous Citations – namely the III VI and VII, the Citation X has more head and shoulder room than its older brothers and though some of the design directions in this aircraft may look similar to other Citations – the commonality of parts is limited to the windshield , the tail light bulb and few cockpit and cabin controls.  Even though the fuselage uses a common design the position where the wings are attached to the fuselage on the Citation X is very different from any other previous Citations.
This Cessna also uses much longer wings compares to any other Citation. The wing sweepback at quarter chord on the Citation X is 37 degrees which is only second to the mighty Boeing 747 with is swept 37.5 degrees and is considerably more than any other private jets. This swept wing design along with a supercritical airfoil benefits the Citation X to attain its very important Mach number thus the super high speed.  The one piece wing is placed on the bottom half of the fuselage thus increasing cabin space.
The Cessna Citation X is also the first Cessna to use controls powered by dual hydraulic systems for redundancy. According to Cessna engineers the Citation X needed as many actuators and hydraulic pumps as a Boeing 737 aircraft and with much lesser space within its wings that was a real challenge.
Coming to the inside now – the Citation X uses glass cockpit avionics – the Ultra modern Honeywell Primus 2000 EFIS with a 5 color CRT displays. The Citation X has seating for 6 passengers in good comfort and the pilot cabin sits 2. Other in cabin standard facilities are present but nothing special compared to the latest developments from Bombardier or Gulfstream.
To conclude – The Citation X program was launched by Cessna in October 1990 and it took 3 years since then to fly the first prototype that is in December 1993. The Citation X was granted certification in 1996 with the first deliveries happening in 1997. As you could already see the age of the Citation X which is well over 12 years now, but if you are amongst the flying community you would know what kind of a charm this super fast beast holds amongst pilots and business flyers alike. Yes some features do feel backdated inside but the Cessna Citation X still remains one of the business Jet Icons that mere others can look up to. In short if you like cars and relate more to them and know about the McLaren F1 then the Citation X might just be the flying version of that McLaren within the aircraft kingdom.