Flying with comfort at high speeds and low cost, the Embraer EMB 120 Brasilia. This twin-turboprop commuter airliner was first introduced in the mid-1980s and is still active today. While there are some areas in Europe where it is possible to find this aircraft, it is mostly used in the US and other locations in the Western Hemisphere. 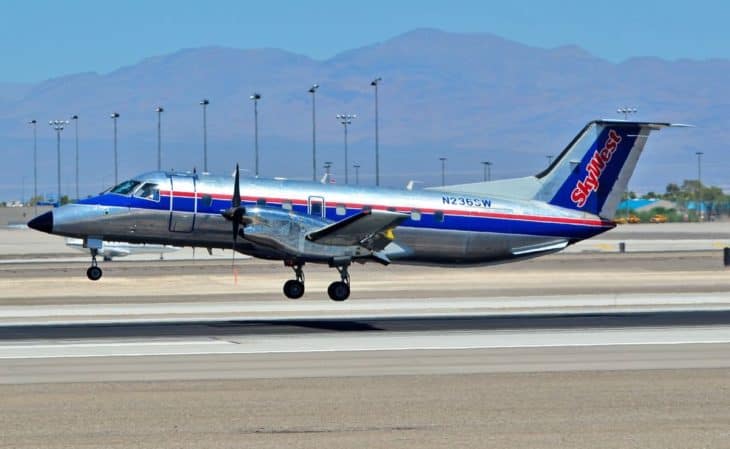 This small and powerful twin-turboprop airliner is designed to easily transport passengers and cargo. The headquarters for the company are in Sao José dos Campos, São Paulo, Brazil. The extended range version of the EMB 120, the EMB 120ER, was first delivered in 1993, eight years after the EMB 120 entered into service.

The EMB 110 Bandeirante was incredibly successful, leading Embraer to try to replicate that success with a transport category airline. This family had three models in it, and one was the EMB 120.

This aircraft attracted a lot of attention right away, partly because of the speed, ceiling, and size of the aircraft. Thanks to these features, it offers incredible service around Europe and the US that is direct and fast. It first entered service in October 1985 with Atlantic Southeast Airlines.

Most of the EMB 120s that were sold stayed in the Western Hemisphere. Great Lakes Airlines has six of these aircraft in their fleet, and Ameriflight uses ten of them as freighters.

There are some airlines in Europe that use the EMB 120, such as Atlant-Soyuz Airlines, ELT, DAT, and Angolan Air Force. There are more than 370 of this aircraft in service around the world, spread out among 32 operators. Some of the major airlines that use this aircraft are Atlantic Southeast Airlines, SkyWest, and Comair.

The low mounted wings are straight, there is a T-tail, and the fuselage is a circular cross section design. Made from aluminum alloy skin with a single three-spar design wing, this aircraft is designed for safety and comfort in the skies. There are a few variants of the EMB 120. The most basic production version is the EMB 120.

The EMB 120ER is an extended range version that also has an increased capacity. These aircraft can easily be converted into the models EMB 120QC or EMB 120FC. The EMB 120QC is a quick-change cargo version of this aircraft, while the EMB 120FC is a full cargo version.

There is room for two pilots in the flight deck, and it is equipped with a heading reference system and dual digital attitude. Additionally there is a Rockwell Collins weather radio, a dual VHF-22 unit, a TDR-op transponder, and indicators for altitude.

The Dorne and Margolin emergency location/transmitter unit allows for safety during dangerous flights.

The cabin is 2.1 meters wide and 9.38 meters long, and sits three passengers in a row. One crew member and thirty passengers can fit on board. A Honeywell pressurization and air conditioning system keep things comfortable and safe.

Pratt & Whitney provided turboprop engines for this aircraft. They are PW118 or PW118A engines and offer 1,800 standard horsepower each. The de-icing system in the engine air intakes prevent accidents in the air.

The propellers are from Hamilton Sundstrand and are four-bladed reversible auto feathering propellers that are made from glass fiber blade and aluminum spar.

Together the two fuel tanks hold 3.340 liters. The system is fitted with a single refueling point under the starboard wing as well as a gravity point above each wing.

This aircraft has a maximum altitude of 9,750 meters. The maximum cruise speed of this aircraft is 606km/h and has an impressive range of 3,071 kilometers.

This aircraft has a retractable tricycle-type landing gear that is hydraulically operated. It also features Goodrich wheels with steel or carbon brakes. There is a Hydro Aire anti-skid system and oleo-pneumatic shock absorbers.

ATR Aircraft is the biggest competitor for Embraer’s EMB 120. Larger propeller-powered aircraft have become a thing of the past, but smaller turboprops are still a great option for short routes. The ATR 42-500 is a fifty-seat turboprop aircraft that is great competition. Another is the ATR 72-500, which is a bit larger and seats 72 passengers. This makes it a great option for use in slightly bigger or busier areas.

The EMB 120 has a reported operating cost per block hour of around $1,313, which is about average for this type of aircraft.