The Cessna 404 Titan is a twin-engined, propeller-driven, light aircraft produced by Cessna Aircraft Company. The titan was Cessna’s largest twin aircraft powered by piston engines during its development in the 1970s. 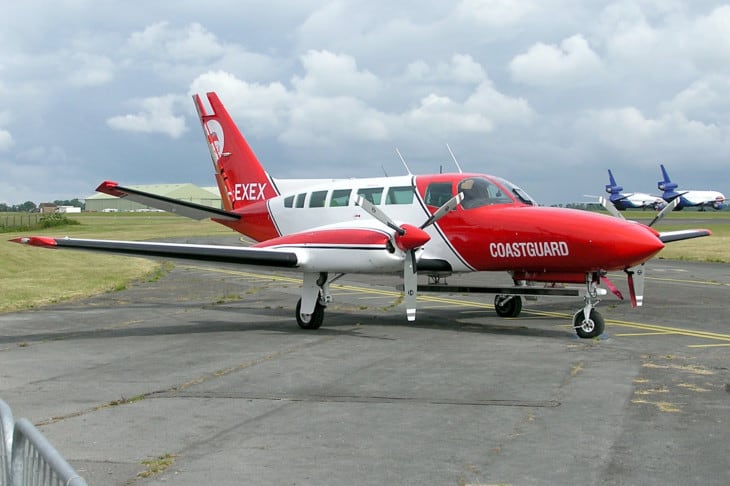 In July 1975, the aircraft company Cessna announced to the public its development of a new piston twin capable of airline, freight, and corporate works, that can take off with a 1,560 kg payload from a 770-meter airstrip.

The Cessna 404 was developed from the Cessna 402, with a larger vertical stabilizer and other modifications. It was considered the largest piston twin-engine aircraft developed by the company as to date. It has a similar typical fuselage as the Cessna 441 Conquest with a fuselage diameter of 1.5 meters, an exterior length of 12.04 meters, and a height of 4.04 meters. But the two were dissimilar in their engines- the Titan is an unpressurized aircraft powered by two Continental Motors GTSIO-520 piston engines. Each engine produces a maximum thrust of 375 horsepower.

The Cessna 404 Titan is designed with a bonded wet wing with a wingspan of 14.23 meters and a wing area of 22.48 square meters. It also features a trailing link main landing gear same with the Conquest. On February 26, 1975, the first prototype conducted its maiden flight. In October 1976, aircraft deliveries started.

There were three primary variants of the Titan, each differs in internal equipment fit. The Titan Ambassador is a conventional 10-seater passenger aircraft, the Titan Courier is a convertible passenger/cargo variant, and the Titan Freighter is a pure cargo variant. The Freighter was particularly designed for freight operations with a reinforced floor, cargo doors, and walls, and a ceiling built from materials resistant from any impact and bump. All of these variants were provided with II and III factory fitted avionics equipment. The Ambassador I has a maximum speed of 232 knots at 16,000 feet and a cruise speed of 163 knots at 20,000 feet. It has a travel range of 1,840 nautical miles and a climb rate of 1,575 feet per minute.

The Cessna 404 Titan went through minor enhancements from 1980 when the wingspan was extended and the wingtips were restructured. The aircraft was produced from 1976 to 1982 with a total of 396 Titan built.