The 441 Conquest II was purposely produced to fill the gap between Cessna’s jet and piston engine aircraft. It is the first turboprop-engine aircraft designed and manufactured by Cessna in the 1970s. With a range of approximately 2,200 nautical miles and a relative low cost, the Conquest II was an unparalleled aircraft in its time. 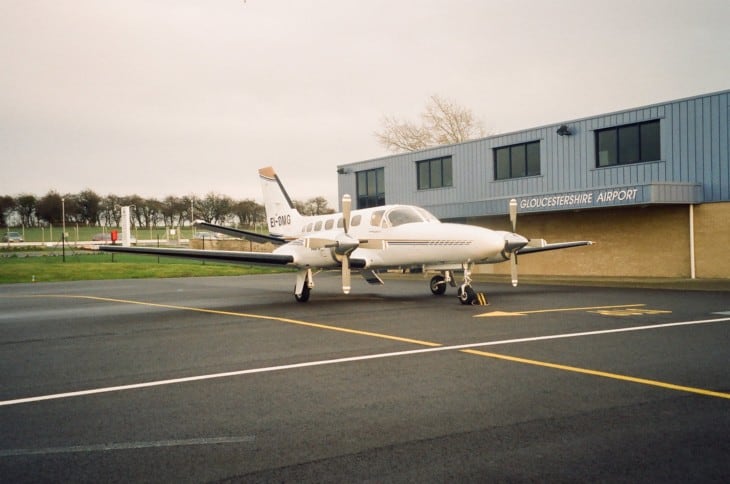 The initial design from 1972 for the Cessna 441 Conquest II was designated as the Model 435. A prototype the same with the 441, the Model 435 was intended to be powered with GTSIO-520 engines by Teledyne Continental Motors. It is a six-cylinder, horizontally opposed engine with an overhead valve train, TCM fuel injection, and an air-cooling system. Each engine produces a maximum thrust of over 300 horsepower. The powerplant is also equipped with three-bladed propellers.

By 1975, the prototype was further developed and evolved into a turboprop-powered aircraft, designated as the Model 441. On August 19, 1977, it was awarded the Federal Aviation Administration type certification. In 1983, the manufacturing company renamed the Model 441 as the Conquest II.

In 1986, the Model 435 powered by Pratt and Whitney PT6A turboprop engines took its maiden flight. Unfortunately, the prototype was not a success and did not enter production.

In the course of the 1960s, Cessna began to develop its 400 series of piston twins; subsequently, in 1972, the company launched the first Citation fanjet. However, the Arab oil embargo in 1973 and the persisting demand of competing turboprop aircraft prompted the company to convert two of its piston twin aircraft into turboprops.

In 1975, the 435 design developed into the Model 441, a turboprop-powered aircraft. It was a development of the Cessna 404 Titan.
On August 19, 1977, the Model 441 received its Federal Aviation Administration type certificate. In 1983, the aircraft was renamed as the Conquest II. Later models were designed with lighter weight four-bladed propellers by McCauley. In 1986, a Pratt and Whitney PT6A-112 turboprop-powered aircraft was flown but was not able to get into production.

The Conquest II has a length of 11.89 meters, a height of 4 meters, and a fuselage diameter of 1.6 meters. It has a wingspan of 15.04 meters and a wing area of 23.56 square meters. Upgraded versions were designed with winglets for an increase in speed and better stability about the roll axis.
Cessna made numerous enhancements on the Conquest II. Most of the fleet has been upgraded to Garrett TPE331-10 engines because of the excellent performance and maintenance intervals. The initial fiberglass exhaust portion is susceptible to cracking that made stainless exhausts another favored option. The three-blade propellers were converted to four-blade Hartzell propellers that yield 2.5 inches more ground clearance, decrease noise in the cabin, improve the rate of climb, and increase the airspeed.

The initial autopilots installed on the aircraft were still being used by most of the Conquest IIs; however, the last twenty aircraft produced were installed with Sperry SPZ500s to provide better assistance for the pilot and to reduce workload. Retrofits are mainly the Rockwell Collins APS-65 or the S-Tec 2100. Several operators had made the switch when Reduced Vertical Separation Minima (RVSM) altimeters were installed which were required for an aircraft to fly above 28,000 feet. A full upgrade in avionics incorporates SiriusXM satellite weather radars for full coast-to-coast coverage without altitude limitations, RVSM altimeters, Global Positioning System (GPS), and Terrain and Traffic Collision Avoidance System (T2CAS) that provides avoidance alerts based on the Conquest II’s ability to climb. The aircraft can also be installed with an Avidyne/S-TEC Alliant integrated glass panel system.

The Conquest II has a cabin length of 3.9 meters, a height of 1.3 meters, and a width of 1.4 meters. It can accommodate up to nine passengers in flight.

A pair of Garett TPE331 turboprop engines power the Conquest II. The compact, lightweight, and powerful engines provide unmatched performance, cost, and endurance. Upgraded versions into -10s have a maximum thrust of up to 1,000 shaft horsepower compared to the older -8 engines flat rated to 635 shaft horsepower. The aircraft equipped with -10engine has considerably increased its climb rate and improve cruise speed at altitude. The engine is a single-shaft turboprop with integral gearbox, two-stage centrifugal compressors, reverse annular combustor and a three-stage axial turbine.

On November 18, 2018, a flying Conquest II operated by Bismarck Air Medical was destroyed when it went out of control and broke out in-flight, resulting in an impact on an open field near Harmon, North Dakota. The pilot, together with the flight nurse and the paramedic were fatally injured.