A very stable, light transport aircraft of Cessna. The 421 Golden Eagle was a pressurized development of the Cessna 411, powered by two Continental piston engines capable of delivering 375 horsepower of thrust. 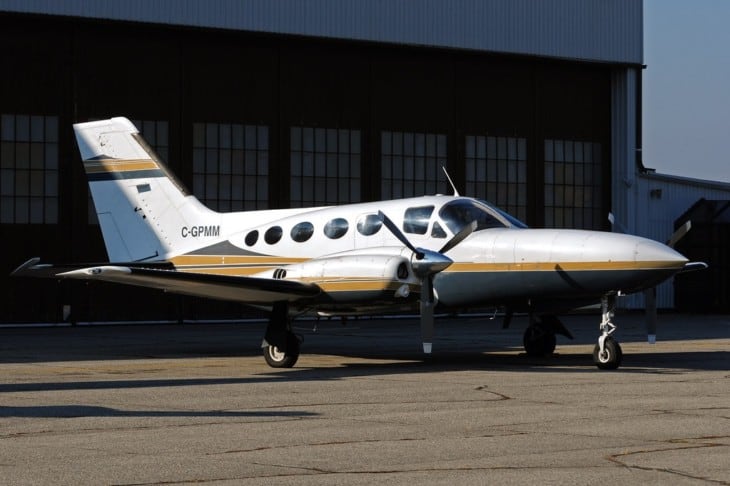 In May 1967, the initial production of the Cessna 421 started. In 1968, it was introduced to the public. Similar to the Cessna 310, the original 421 is designed with a “Stabila-Tip” fuel tanks on the wingtips, electromechanical landing gear, and a 170-gallon fuel system. The aircraft became a crowd-puller; two hundred were sold in its first year.

The Golden Eagle has increased its demand for the public. As a result, after a year, refinements were applied with some modifications such as a three-inch stretch of the fuselage, an additional five gallons of fuel capacity, and a 40-pound added in its gross weight. The new version was designated as the Cessna 421A.

In 1971, other significant improvements in the design were made. The gross weight and empty weight have increased. The wingspan was extended by two feet, increasing the service ceiling by 5,000 feet. The nose was also extended two feet to lodge a larger baggage compartment that could carry a 6-foot, 600-pound object. This version is designated as the 421B.

In 1975, the aircraft got more refinements such as the improvement in the pressurization system, wider cabin, and larger round windows. The aircraft is also equipped with a package of equipment allowing it to fly even into known icing conditions.

In 1976, the version 421C was introduced. The initial Stabila-Tip tanks were replaced by a wet-wing fuel system. It provided several benefits such as increased fuel capacity, obtained weight savings, improved operational efficiency, and enhanced performance. The hydraulic system replaced the electromechanical landing gear. It had a trailing-link and a high-pressure nitrogen bottle system for emergency purposes. The 421C was produced until 1985 and 1,905 aircraft had been delivered.

The Cessna 421 Golden Eagle is a low-wing monoplane with all-metal construction, retractable tricycle undercarriage, and a pair of piston engines mounted on each wing in tractor configuration. It has an exterior length of 11.2 meters, a height of 3.5 meters, and a fuselage diameter of 1.55 meters. The wingspan is 12.53 meters, the wing area is 20 square meters, and the wheelbase is 3.35 meters.

The Golden Eagle features a quiet cabin because the engines providing sufficient power at low prop speeds. The pressurization system ensures great comfort at altitude by continuously pumping fresh, outside air into the fuselage. The1.4-meter wide cabin has enough room for amenities such as a galley and a toilet. The aircraft has a cabin height of 1.3 meters and a length of 3.45 meters. It can accommodate six to ten passengers depending on the variant.

The cockpit is equipped with an adjustable seat for the pilot. There is a thick window pillar that blocks the outside view. On versions with ice equipment package, the entire windshield is heated, getting rid of the flat hot plate that is typical on most twins. The panel features good design for the most portion, with the engine gauges positioned at the right-top, near the pilot’s line of vision. On the 421C version, the capacitance-type fuel gauge is located on the right; these provide more accurate readings compared to float gauges.

The Cessna 421 Golden eagle is powered by a pair of Continental GTSIO-520 turbocharged, fuel-injected, and geared flat-six engines producing 375 horsepower each. This 6-cylinder horizontally opposed piston engine has an overhead valve train, TCM fuel injection, and an air-cooled cooling system. It has a length of 1.61 meters, a width of 86.5 centimeters, and a height of 67.6 centimeters.