The Cessna 408 Skycourier is a twin-turboprop, high-wing, utility aircraft under development by Textron Aviation. It took to the skies for the first time on May 17, 2020, powered by Pratt and Whitney Canada PT6A-65SC engines. 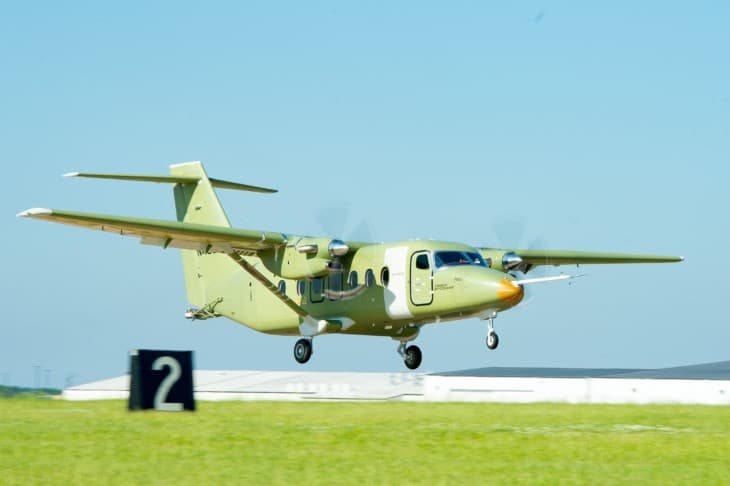 On November 28, 2017, Textron Aviation unveiled a new large utility turboprop designated as Model 408. The aircraft’s configuration was built to fit FedEx Express requirements. The largest express transportation company in the world, FedEx Express has signed on as the launch customer for up to one hundred aircraft, with an initial fleet order of fifty cargo aircraft and options for an additional fifty.

The Skycourier was expected to enter into service in 2020. In March 2018, initial tests in the wind tunnel were performed and accomplished. The maiden flight was initially set for 2019 and the design will be certified to FAR Part 23 standards.

In December 2019, assembly of the wing and fuselage was completed. In March 2020, initial ground testing was performed, including inspection on the fuel system, engines, avionics interfaces, and electrical systems.

On May 17, 2020, the SkyCourier took its first flight from Beech Factory Airport, with its senior test pilot Corey Eckhart and chief test pilot Aaron Tobias. During the 2-hour and 15-minute flight, the aircraft was tested for its performance, stability and control, propulsion, environmental, flight controls and avionics systems.

The SkyCourier is a twin-engine, high-wing, large utility turboprop built for high utilization operations. It will be offered in a 19-passenger version incorporating large round cabin windows for greater views and separate crew and passenger doors for smooth boarding, or in a cargo version which features a large cargo door and a flat floor cabin sized for three LD3 shipping containers and 6,000 pounds of maximum payload, with a maximum cruise speed of 200 knots and a maximum range of 900 nautical miles. Both versions will provide single-point pressure refueling to allow faster turnarounds.

The clean-sheet design of the SkyCourier will feature improved cabin flexibility and payload capability, excellent performance, and reduced operating costs compared to its rivals. The airframe is constructed from conventional aluminum materials and will be powered by two Pratt and Whitney Canada PT6A-65 turboprop engines with 1,100 horsepower of thrust each. The aircraft is also designed with fixed landing gear and Garmin G1000 avionics.