The 320 Skynight was a large, refined aircraft produced by Cessna. It features a wider cabin and also boasts turbocharging, one of the numerous areas in which Cessna pioneered or at least persisted, where other aircraft manufacturers attempted but were not successful. 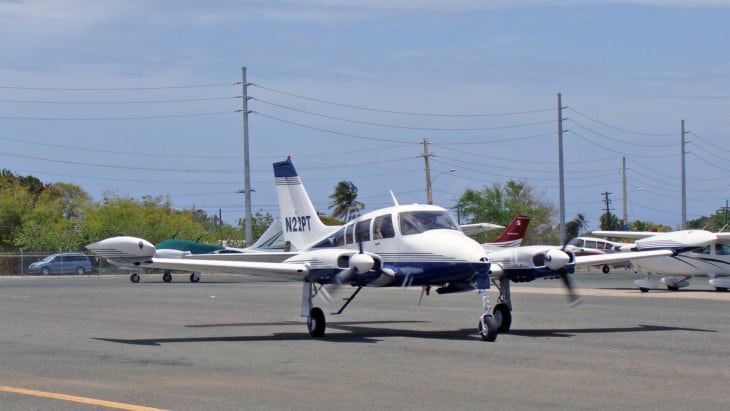 The 320 Skynight was developed out of efforts of Cessna to produce a heavier variant of the 310 model. The initial Skynight features supercharged engines for better performance. In 1963, the canted wingtip tanks were incorporated. In 1966, engine power was increased from 260 to 285 horsepower.

The later models had extended engine nacelles for added baggage capacity, a roomier cabin with a larger glass area, and other modifications. Despite these added features, the aircraft’s gross weight is just 100 pounds heavier compared to the Cessna 310. Also, it features a cruise speed approximately 17% greater due to its capability to fly at higher altitudes with good performance.

The Skynight has a maximum cruising speed of 240 knots and a range of 740 nautical miles. It can fly up to 28,100 feet and has a climb rate of 1,820 feet per minute. It has a takeoff and landing distance of 414 meters and 521 meters respectively.

The aircraft could carry a maximum of six persons on board. It has an exterior length of 8.9 meters, a height of 2.18 meters, and a fuselage diameter of 1.3 meters. The wheelbase is 3.15 meters and the wingspan is 11.18 meters. It has a cabin length of 2.6 meters, width, and height of 1.2 meters.