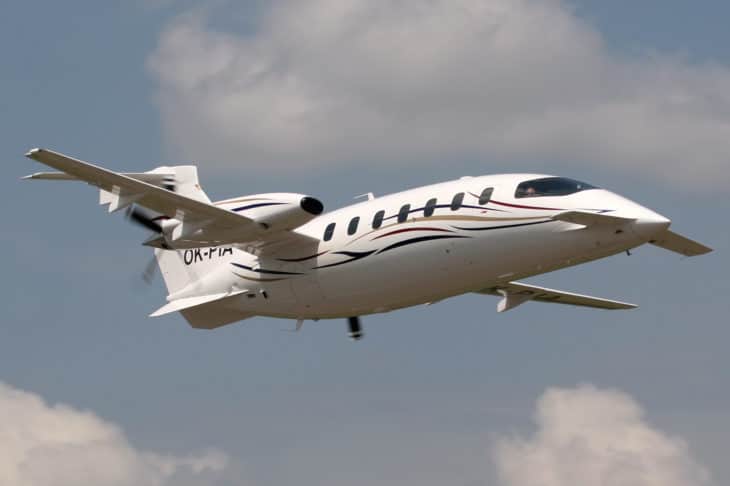 Ever since then The P180 Avanti II has been a success story, with orders already well over 150 the unique classy shape still allures many towards its unmistakable charm. The Avanti II aircraft are built at Piaggio Aeros manufacturing facilities in Genova, Italy.

Piaggio America, Inc. based in West Palm Beach, Florida, takes care of the marketing, after sales, servicing and maintenance of the aircraft sold in USA and other parts of North America.

Piaggio had received confirmed orders for 36 P180 Avanti II aircraft from Avantair in 2006 amongst which more than 20 are already delivered. Also 2 P180s were delivered to the Italian Guardia di Finanza border patrol agency in 2007, this also proves the aircrafts capability to fit into multiple roles.

Coming to the technical analysis of the Piaggio Aero P180 Avanti II – there is not much to fault either. The P180 Avanti II has a top cruise speed of 463 miles per hour which is very good for an aircraft in this segment, also this aircraft can be flown by a single pilot (though a co-pilot seat is present) and can seat 9 full grown adults in extreme comfort.

The Avanti II has a service ceiling of 41000 ft and with a psi differential, the aircraft cabin maintains sea-level pressure up to 24,000ft above sea level, which is astonishing. The P180 II has an maximum range of 1400 nautical miles.

The 1.75 m high and 1.85 m wide cabin is well appointed and cabin noise is kept at a maximum of 68 dBa, this is achieved by mounting the engine pusher fans at the back which directs noise towards the tail of the aircraft thus helping to keep the cabin comparably noiseless.

The most interesting part of the P180 II design is though the small front wings on the nose which rather than using a conventional aerodynamic configuration which forces the tail down provides additional lift to push the nose of the fuselage upwards. The conventional T-tail provides stability.

The two wings can hold up to a maximum of 1585 liters of fuel which is good enough for a 3322 km max range. The hydraulically retractable tricycle-type landing gear on the Piaggio Avanti II helps the aircraft to operate from smaller airfields as well with a min take off distance of 869 meters and a minimum landing distance of 872 meters.