The Cessna 337 Skymaster is an American twin-engine civil utility aircraft designed in a push-pull configuration. It was considered the most commercially successful push-pull attempt in terms of numbers produced. 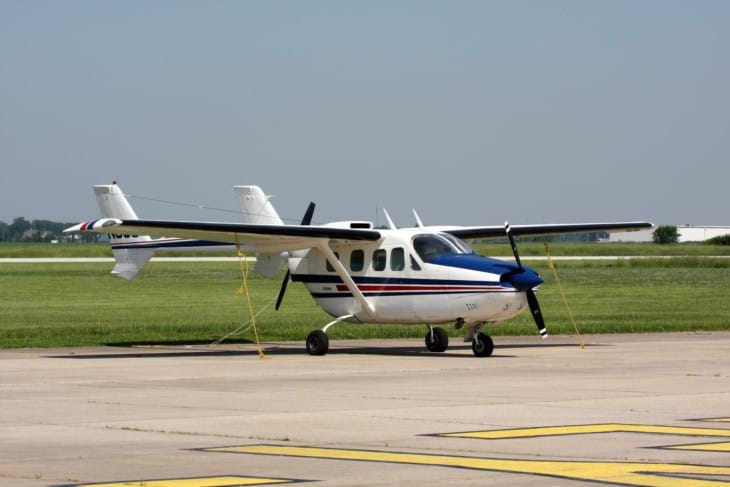 In February 1965, the 337 Super Skymaster was unveiled to the public. It has an exterior length of 9.07 meters, a height of 1.9 meters, and a fuselage diameter of 1.2 meters. With its cabin width of 1.1 meters and length of 2.9 meters, the aircraft can accommodate up to five passengers and one crew.

It was a larger aircraft outfitted with more powerful engines, retractable undercarriage, and a dorsal air scoop for the rear engine. The engines are located in the nose and rear of its fuselage. Twin booms stretch aft of the wings to the fins, with the rear engine between them.

The 337 Super Skymaster may not be the most famous twin in the market, but it was successful in obtaining its main goal which is to eliminate asymmetric thrust and reducing the pilot’s workload in case of an engine failure.

During an engine-out occurrence, typical piston twins normally require to be handled delicately and carefully in case the aircraft get too slow and roll over on its back. The manufacturing company, Cessna solved the issue by aligning the two engines with the airframe centerline, providing pilot the safety of a second engine without the cost of adverse handling. The 337 was granted its own class rating by the Federal Aviation Administration, restricting pilots to centerline-thrust twins only.

The Super Skymaster is powered by two Continental IO-360-C engines with a rated thrust of 210 horsepower each. It is an air-cooled, horizontally opposed six-cylinder piston engine. The aircraft can fly up to 19,500 feet and climb at a rate of 1,200 feet per minute. However, the 337 was not exceptionally fast compared to other aircraft of its kind. The maximum speed could only go up to 173 knots at sea level, and the cruise speed is 125 knots at 10,000 feet. It has a travel range of 839 nautical miles. The take-off and landing distances are 471 meters and 500 meters respectively.