The Xtra Wide Body Line of Passenger Airplanes: The Undeveloped Airbus A350-800 XWB. The heavy and long-range A350 XWB has an extra wide body and was first announced in late 2006. Designed with both wing structures and a fuselage made mostly from carbon fiber reinforced polymer, this is a large airplane that can easily seat 369 passengers. 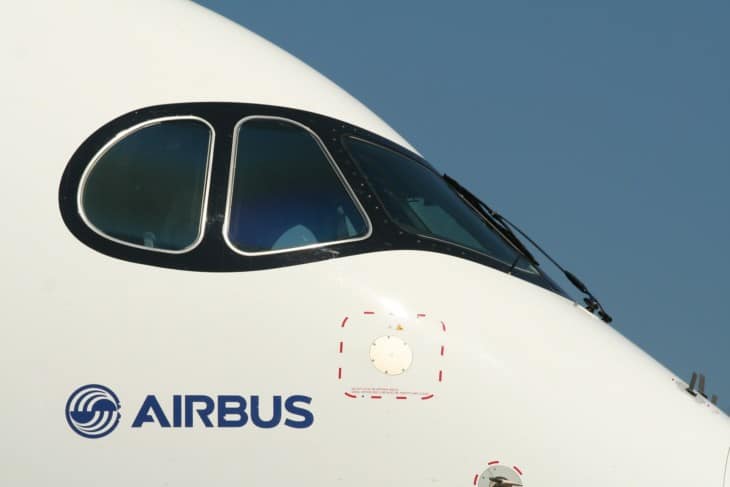 182 orders were taken for this planned variant of the A350, but in the end it was scratched from the line up. Airbus CEO Fabrice Bregier believed that customers would either opt for the larger A350-900, or alternatively choose the renewed A330neo.

While originally based off of the A330, the entire A350-800 XWB was scrapped and redeveloped after complaints from prospective customers. The passenger version of this plane is available in three variants. It’s a combination of the efforts of multiple subcontractors who were all chosen due to their ability to create a powerful and advanced aircraft.

Made from 45% high-strength composite construction and the rest aluminum lithium alloy, titanium, steel, and aluminum, the A350-800 XWB is powerful, light, and great for long hauls. Magellan Aerospace entered into a contract with Airbus in early 2011 to provide aluminum lithium components.

The powerful wings are made from a carbon fiber reinforced plastic and have an impressive wingspan of 64.8 m.

Airbus received 583 orders for the A350-800 XWB in January, 2011. Some of the customers ordering these aircraft as well as other versions of the A350 include China Airlines, Dubai Aerospace, TAM, Singapore Airlines, and Qatar.

Other orders followed quickly, including ones for Cathay Pacific, Alafco, Air France-KLM, Japan Airlines, LATAM Airlines, Ethiopian Airlines, and China Eastern Airlines. The first A350 XWB wing lower cover was delivered in September 2011, after which it was transported to France and used in the final assembly.

By the middle of 2016, Airbus had already gotten 802 orders from 42 different airlines, helping to secure the value of the A350 XWB and making it a great competitor.

Designed to be able to easily handle both long- and short-haul flights, the A350 XWB is durable and large. Airbus relied on multiple subcontractors to provide the high-quality components for its construction.

CAE was hired to build full flight simulators for both the A350 XWB, as well as the Boeing 777. Additionally, Hexcel Corporation was hired for making carbon fiber composites, GKN for the fixed trailing edge, Latecoeure, and Spirit Aerosystems for the upper fuselage.

There’s room for two in the flight deck. In this space there is an impressive head-up display, on-board info system, navigation system, and standby instrument system. Thales provides the cockpit systems and avionics, resulting in a powerful airplane with responsive controls, great displays, and plenty of information for the pilots.

The flight management system is provided by Honeywell, while Rockwell Collins supplies not only the communication systems, but also the navigation systems. The flight data acquisition unit is supplied by Sagen Defense Securite.

One of the great features of the A350-800 XWB is that the cabin can be configured in a few different ways, depending on the needs of the airline. The comfortable seats offer plenty of space for passengers, and there is plenty of both headroom and storage.

There are twin aisles, with the cabin being an impressive 5.36 m wide. Inside the cabin there is a powerful Honeywell environmental control system that keeps the cabin a comfortable temperature, as well as pressurized.

Designed for power, the Rolls Royce Trent XWB engines were created specifically for use in this plane. These engines feature a three-shaft design with a 3 m diameter fan. With built-in engine management and health monitoring systems, this engine is powerful, responsive, and safe.

The engines offer plenty of thrust and are paired with Goodrich engine nacelles, as well as thrust reverser systems.

The A350 XWB has a wingspan of 64.8 m, and a wing sweep of 35 degrees. This airplane can easily travel up to 8,100 nautical miles, but can also easily operate in smaller areas, as well. Since it can be configured to handle routes up to 9,700 nautical miles, this aircraft is incredibly flexible.

Advanced technology ensures impressive air quality, thanks to the optimized cabin altitude, humidity, and temperature. The air is renewed every two to three minutes for quality.

Landing gear matters, and Messier Dowty provides the main landing gear on the A350 XWB. The nose landing gear is provided by Liebherr-Aerospace. The main gear is free from cadmium and chrome and instead made from titanium and other durable materials.

Goodrich provides the carbon brakes, as well as the wheels, while the braking control and landing systems are provided by Messier-Bugatti.

The A350 XWB is primarily in competition with the Boeing 777 and 787. Boeing has long been the main competition for Airbus aircraft, and this plane is no exception.