The Airbus / EADS CASA C-295M is a twin-engine, medium-range, multi-purpose transport aircraft that boasts short take-off and landing capability and a strong landing gear that makes it able to operate even in stern locations. It is also designed to support low-level flights for tactical missions. 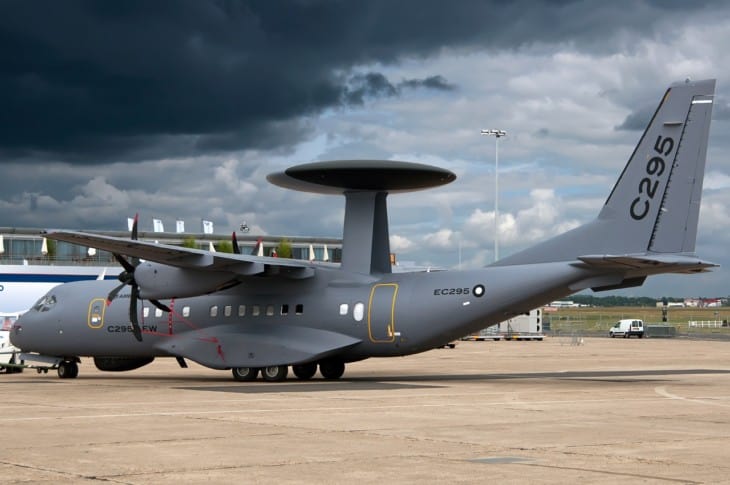 Construcciones Aeronauticas SA (CASA)- a Spanish aircraft manufacturer that is now part of Airbus Defence produced this versatile and efficient twin-turboprop tactical military transport aircraft known as C-295M. Production took place in the Airbus Military Facility in Seville Spain. Derived from a transport aircraft CN-235, this aircraft has a stretched fuselage, and a high-wing, rear-loader design.

The aircraft made its announcement in June 1997 at the Paris Air Show and took its maiden flight after a year, in 1998. C-295 received certification for operations in 1999.

There are two to three UHF/VHF radios, a single or dual HF radio, and an audio control system inside the communication suite. The aircraft has a Cockpit Voice Recorder, Flight Data Recorder, Identification Friend or Foe, and an Emergency Locator Transponder. Two Multi-Mode Receivers, two Distance Measuring Equipment, two Automatic Direction Finders, and one Direction Finder is included in the navigation equipment.

The advanced system in avionics of C-295M is designed to suit operational requirements for both civil and military purposes.

The main cabin with dimension of 12.7 x 2.7 x 1.9 meter has the longest cabin which can accommodate up to 71 seats; or 48 fully equipped paratroops or up to 75 troops. Two paratroop doors are attached side by side on the rear part of the cabin. It can also be arranged for medevac missions, cargo operations, and passenger transport. For easy cargo access, there is a roller loading system installed, and a wide door and cargo ramp in the upswept rear fuselage.

There are several recorded incidents from 2008 to 2012 involving C-295. January 23 2008 is the Mirosławiec Air Accident where a Polish Air Force C-295 crashed during its approach that caused death of 20 people. After the incident, all Polish C-295 were grounded. On October 31 2011 the Czech Army grounded four C-295M because of an in-flight equipment failure on board one aircraft. One of the two engines stopped working upon landing, also a cockpit display and equipment failed. On November 9, 2012, while flying from Paris to Algeria, Algerian Air Force C-295 crashed in the southern part of France which killed all six people on board.