Tagged as Frankenplane due to its patchwork structure of parts from different aircraft, the Super Guppy is an oversized cargo transport manufactured by Aero Spacelines, Inc. It is the only aircraft in the world that can carry a complete S-IVB stage. 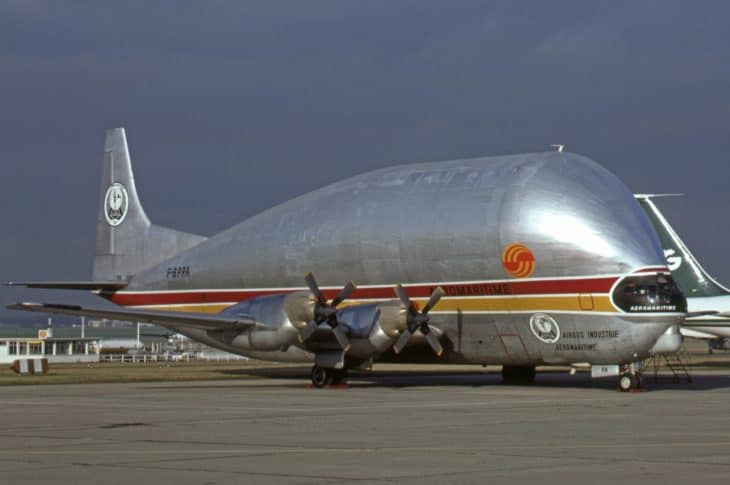 Designed by Aero Spacelines, an American aircraft manufacturer from 1960 to 1968, the Super Guppy was introduced in 1965. The Super Guppy is the descendant of the Pregnant Guppy, the first Guppy aircraft produced by the company.

During the early years, the transportation of outsize cargo has always been a dilemma for government and private logistics planners. Because of the restrictions of land travel, passing over land of oversized cargo was not feasible.

In 1961, Aero Spacelines presented the Pregnant Guppy, the first of the Guppy line of aircraft assembled from a reformed KC-97 Stratotanker. This aircraft supported the National Aeronautics and Space Administration (NASA) in delivering critical outsized cargo to the Cape in just 18 hours, compared to 18 to 25 days on a barge.

The first Super Guppy was assembled from the military variant of the Boeing 377 Stratocruiser. The fuselage of the aircraft has an exterior length of 43.84 meters, tail height of 14.78 meters and diameter of 7.92 meters. Its wing has a span of 47.62 meters and has a wheelbase of 12.7 meters.

The Super Guppy has a cargo length of 33.83 meters, width and height of 7.62 meters. It can transport items that cannot be transported by other cargo aircraft. Cargo loading of the Super Guppy is uncomplicated.

The aircraft has a distinct hinged nose that opens up to 110 degrees, for a more convenient cargo loading. There is also a control lock and a disconnect system attached at the fuselage break that lets the nose to be opened and closed without disturbing the flight.

The first variant of Super Guppy is powered by T34-P-7WA from Pratt and Whitney. It has a maximum thrust rate of 7,100 hp. It can carry a 24,000 kg maximum load and has a maximum cruise speed of 260 knots.

The Super Guppy Turbine is powered by four T56-501-D22C turboprop engines from Alison Engine Company, an aircraft engine manufacturer based in the United States. With a maximum power of 3,750 hp, it has a travel range of 1,734 nautical miles. The aircraft has a service ceiling of 25,000 feet and a maximum cruise speed of 250 knots.

The Super Guppy Turbine is driven by 501-D22C engines from Allison Engine Company. It has a large cargo section made from scratch in place of being changed from the first C-97J components. This aircraft supported Airbus in carrying aircraft parts from other production facilities to the final assembly facility in Toulouse, France.

In 1982 and 1983, Union de Transports Aeriens, the second largest international French Airline constructed two more Super Guppy Turbines before they were purchased by Airbus. The Super Guppy has been taken over by the Airbus Beluga.