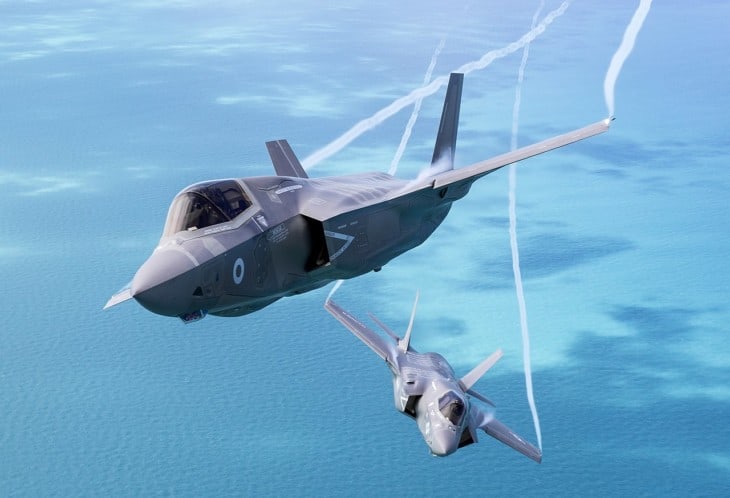 Intended to replace the ageing fleet of F16 , F18 , F15 and AV-8B in the U.S.A. military , the Lockheed Martin F-35 Lightning II has turned out to be the most advanced yet affordable 5th Generation stealth fighter till date. Lockheed Martin the main contract owners collaborates with BAE Systems and Northrop Grumman to craft this marvel.
At a glance the F-35 Lightning looks more like a smaller single engine version of the lethal F-22 Raptor – the only other 5th Generation stealth fighter in existence. The F-35 is an evolution from the Lockheed Martin X-35 which was competing for the valued JSF ( Joint Strike Fighter ) contract for the U.S. Government.
The F-35 Lightning is equally efficient in Air to Air and Air to Ground attacks , is bestowed with advanced sensors which allows it greater battle space. As claimed the F-35 is second only to the F-22 Raptor in close range combat , 4 times more efficient in air to air combat and 8 times more efficient in air to ground attacks compared to current generation Legacy fighters. The F-35 comes in three variants namely :

Engines selected for this aircraft includes the Pratt and Whitney F135 and General Electric / Rolls-Royce F136 , though the STOVL versions with both the engines will use the highly advanced Rolls-Royce LiftSystem. Though smaller in size the lift mechanism of the F-35 is faster than the Harrier by a big margin.
Inside the F-35 Lightning the pilots are welcomed with a vast array of advanced electronics and ergonomics , to mention a few of them – there is cockpit voice recognition system , panoramic cockpit displays , Martin-Baker ejection seats ( standard for all versions ) etc. The fly mechanism goes in favor of a right handed side-stick and a left hand throttle – designed and manufactured by BAE systems. The F-35 also has on board radar sensors developed and supplied by Northrop Grumman. Also all versions of the Lockheed Martin F-35 Lightning II are fitted with HDMS ( Helmet Mounted Display Systems ) instead of the regular HUD, amongst the 4th Generation fighters HDMS can also be seen in the Saab JAS 39 Gripen.
Concern for the Environment – The F-35 Lightning is twice as loud as the F-15 Eagle during take-off and around for times as louder than F-15 while landing , this has become a major concern for some Florida residents living by the F-35 testing bases. Also the F-35 Lightning II is twice as heavy as the F-15 – which though has a lesser max speed and range is still more frugal.
Some reports had also raised objections on the F-35’s performance , these comments were based on some simulator results where a group of Sukhoi had supposedly defeated a smaller group of F-35 Lightning. Both U.S.A. Military and Lockheed Martin has denied such reports to be rumors.
Armament –  GAU-22/A four-barrel 25 mm cannon equipped for 180 to 220 rounds — Equipped to carry Air-Air missiles and Air-Ground missiles with a choice from AIM-120 AMRAAM , AIM-132 ASRAAM , JDAM ( Joint Direct Attack Munition ) , JSOW ( Joint Standoff Weapon ) and Smaller Diameter Bombs — Payload capacity suggests the F-35 can carry more weapons than even an F-22 or the other existing legacy fighters.