The Lockheed F-104 Starfighter was designed and built by Lockheed as a single-engine supersonic interceptor that was widely used as a fighter-bomber during the Cold War. It was initially built as a day fighter by the company intended for the United States Air Force before it was evolved in the early 1960s into an all-weather multirole aircraft and was produced by various countries outside the United States. 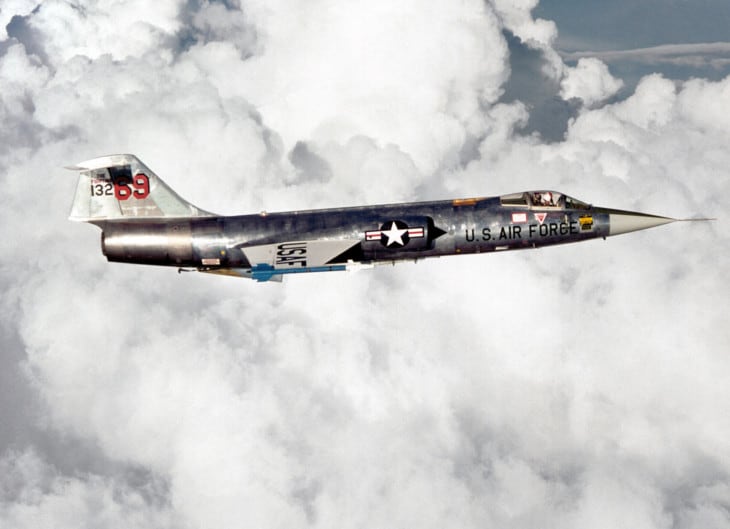 The prototype aircraft designated as XF-104 had two examples fitted with Wright J65 engines. On February 17, 1956, a pre-production aircraft designated as YF-104A took to the air for the first time. It was used for testing the engine, equipment, as well as the performance of the aircraft. The F-104A was the initial production interceptor version. The Starfighter was also greatly produced outside the United States.

The F-104G is fitted with a General Electric J79 engine. It is an afterburning turbojet engine with a single-spool seventeen-stage axial compressor with one row of variable inlet guide vanes followed by six rows of variable stator vanes, cannular combustor, and three-stage turbine. It has a 10,000 lbf dry thrust and 15,600 lbf afterburning thrust. The aircraft has a maximum speed of 1,328 knots.

The combat range and ferry ranges are 360 and 1,420 nautical miles, respectively. It can fly up to 50,000 feet and has an initial rate of climb of 48,000 feet per minute. The F-104G could be loaded with a single 20 mm M61A1 Vulcan six-barreled Gatling cannon with 725 rounds, seven hardpoints with a capacity of 1,800 kg with provisions to carry combinations of four AIM-9 Sidewinder short-range air-to-air missiles and other bombs, rockets, or other stores.