The Lockheed P-80 Shooting Star was a straight-winged jet fighter developed and produced by the American company Lockheed. Introduced in 1945, it was the first jet fighter operated by the United States Army Air Forces. The aircraft was built from 1945 until 1950 with a total number of 1,715 units produced and was retired with the United States in 1959. 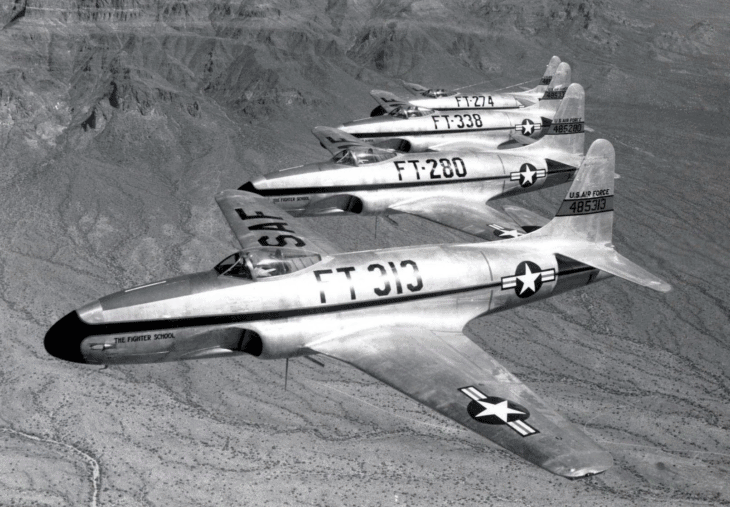 On January 8, 1944, the aircraft prototype designated as XP-80 performed its maiden flight. It was powered by a single de Havilland-built Halford H.1B turbojet. The aircraft was designed with a conventional all-metal airframe and fitted with a thin and straight low wing, and a tricycle arrangement undercarriage.

In late 1944, it entered into service. The Shooting Star was the first fighter jet in operations with its engine located in the fuselage.  It was produced from 1945 to 1950 with a total number of 1,715 units built.

The P-80 Shooting Star is powered by a single Allison J33-A-35 engine. It is a centrifugal compressor turbojet with water injection, a single-stage double-sided centrifugal compressor, fourteen can type stainless steel combustion chambers, a single-stage axial turbine, and a wet sump oil system. The engine produces a 4,600 lbf dry thrust and 5,400 lbf with water injection. The aircraft has a maximum speed of 516 knots at sea level and a cruise speed of 381 knots. It has a standard range of 717 nautical miles and a ferry range of 1,200 nautical miles. It can fly up to 46,800 feet and can climb at a rate of 6,870 feet per minute.