The Mikoyan MiG-15 is a high-transonic jet fighter developed for the Soviet Union. It was built by Mikoyan-Gurevich and was introduced in 1949. The aircraft was among the first successful jet fighters to be fitted with swept wings in order to obtain high transonic speeds and surpassed straight-winged jet day fighters during the Korean War. 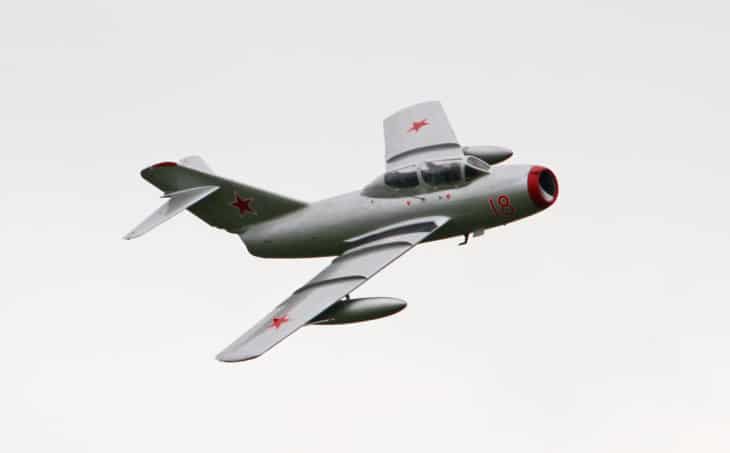 On December 30, 1947, the MiG-15 prototype took to the air for the first time. In 1949, the aircraft entered service and had been operated by different Communist satellite nations such as North Korea where the aircraft was greatly used in opposition to the United Nations forces. Early battles with American aircraft ushered to the production of the improved version designated as MiG-15bis which entered service in 1950.

The aircraft is fitted with a single Klimov VK-1 engine with a maximum power of 5,950 lbf. It is a turbojet engine with a centrifugal compressor, nine can combustion chambers, and a single-stage axial turbine. The MiG-15bis has a maximum speed of 581 knots at sea level and 598 knots at 9,843 feet, and a cruise speed of 460 knots.

The ferry range at 39,370 feet with two 160 US gal drop tanks is 1,360 nautical miles. It has a service ceiling of 50,900 feet and a rate of climb of 10,080 feet per minute. The aircraft is equipped with 2×23 mm Nudelman-Rikhter NR-23 autocannons located in the lower left fuselage with eighty rounds per gun and 1×37 mm Nudelman N-37 autocannon located in the lower right fuselage with forty rounds in total.

It is also armed with two weapon stations with provisions to carry combinations of 100 kg of bombs and other drop tanks, or unguided rockets.