The MiG-21 is designed by the Soviet aircraft manufacturer Mikoyan-Gurevich. It is a supersonic jet fighter and interceptor aircraft which was flown by around sixty different countries around the world. The aircraft is still in service with several nations sixty years after its first flight. The MiG-21 set numerous records in the aviation industry; it was the most-produced supersonic jet aircraft as to date, the most-produced combat fighter as early as the Korean War and formerly the longest production run of a combat aircraft before it was surpassed by F-15 Eagle and F-16 Fighting Falcon. 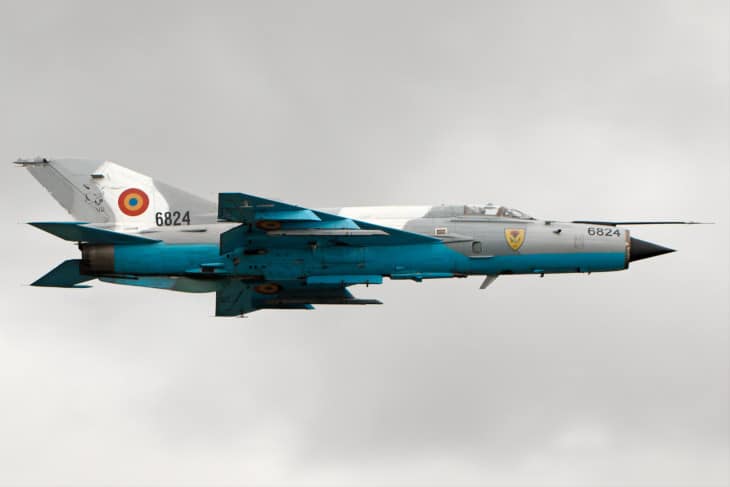 The Mikoyan MiG-21 was a continuance of jet fighters in the Soviet Union; it began with the MiG-15 and MiG-17 which are capable of subsonic speeds, followed by the MiG-19 capable of supersonic speed.

In the early 1950s, the development of the new aircraft started. In 1954, Mikoyan Gurevich Design Bureau completed a preliminary swept-wing design designated as Ye-1. The design was immediately reworked to Ye-2 due to the underpowered engine of the first prototype.

On June 16, 1955, the first delta-wing prototype designated as Ye-4 conducted its first flight. In July 1956, it appeared in the Soviet Aviation Day Display held at Tushino airfield in Moscow.

The MiG-21bis is the ultimate development of the MiG-21 versions. It has an external length of 14.7 meters excluding pitot boom, an external height of 2.6 meters, a tail height of 4.1 meters, and a fuselage diameter of 1.24 meters. It has a wingspan of 7.15 meters and a wing area of 23 square meters.