The MiG-23 is a variable-sweep fighter aircraft of Mikoyan-Gurevich introduced in 1970. Produced from 1969 to 1985, the MiG-23 is a third-generation jet fighter and the most-produced variable-geometry aircraft in the world. 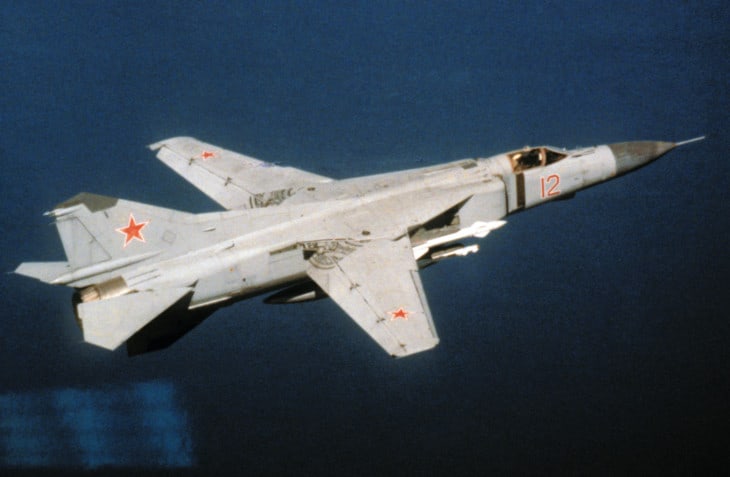 In the early 1960s, development for a fighter that would replace the MiG-21 started. The new design was mandatory to have greater performance and longer range compared to its antecedent while featuring upgraded avionics systems and armaments that included beyond-visual-range air-to-air missiles. Consideration of the primary design was of take-off and landing capabilities. The Soviet Air Force required the aircraft to have a less take-off run.

There were several variants of the MiG-23 built including the first-generation, second-generation, ground-attack variants, and other proposed variants and upgrades that did not enter production.

The MiG-23MLD was a second-generation variant and the concluding fighter version of the aircraft. It has an external length of 16.7 meters, a tail height of 4.82 meters, an external height of 2.7 meters, and a fuselage diameter of 1.1 meters.

The fully spread wingspan is 13.97 meters while 7.78 meters when fully-swept. The fully-spread and fully-swept wing area are 37.35 square meters and 34.16 square meters, respectively. The aircraft has a maximum takeoff weight of 17,800 kg and a fuel capacity of 1,130 US gal.

The MiG-23MLD is loaded with a 23 mm Gryazev-Shipunov GSh-23L autocannon. Two hardpoints are located in the fuselage, two in the wing glove, and two in the wing pylons which can carry up to 3,000 kg of stores with provisions to bear combinations of S-5 rockets, air-to-air missiles such as R-60, R-73, R-23, R-77, R-27R and air-to-surface missiles such as Kh-23 Grom, and up to 500 kg of bombs per hardpoint.