The Messerschmitt Me 262 was the first operational fighter aircraft powered by jet in the world. It started to develop before the Second World War and first flew in April 1941. It was introduced in 1944, and was majorly used by the Luftwaffe and Czechoslovak Air Force and was retired in 1945 and 1951, respectively. A total of 1,430 aircraft were built. 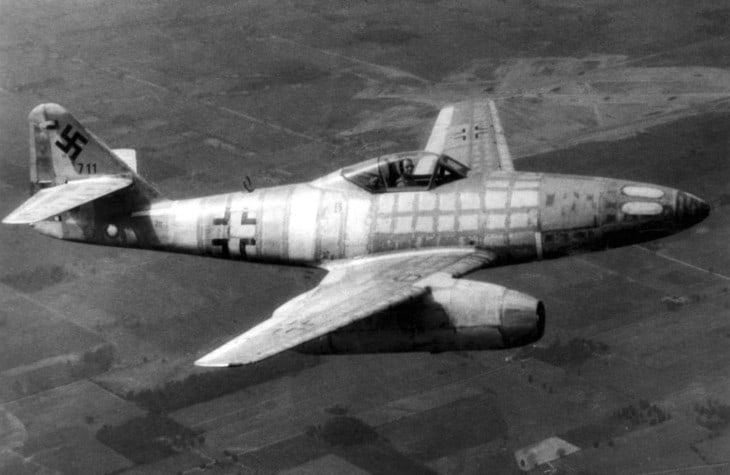 Blog posts that mention the Messerschmitt Me 262:

The Me 262 was designed with higher speed and equipped with better armaments compared with other fighter aircraft of the Allied forces. It was one of the most innovative aviation concepts that were used in the Second World War and served as a light bomber, reconnaissance aircraft, and an experimental night fighter. On April 18, 1941, test flights started. It entered service in April 1944, and other than Germany, Czechoslovakia also operated a few Me 262. Several versions of the Me 262 were produced including a reconnaissance version designated as A-1a/U3, a bomber-destroyer version designated as A-1a/U4, a heavy jet fighter designated as A-1a/U5, and a few more.

The Messerschmitt 262 A-1A was the primary production variant intended as a fighter-interceptor and a fighter-bomber. It is a single-crew aircraft with an external length of 10.6 meters, an external height of 2.8 meters, and a fuselage diameter of 1.6 meters. It has a tail height of 3.8 meters and a wheelbase of 3.9 meters. The wingspan is 12.6 meters and the wing area is 21.7 square meters. It has an empty weight of 3,795 kg, a gross weight of 6,473 kg, and a maximum takeoff weight of 7,130 kg. The maximum payload is 1,000 kg and the fuel tank capacity is 635 US gal.