The Messerschmitt Me 410 was manufactured by the German companies Messerschmitt and Dornier as a heavy fighter and Schellbomber operated by the Luftwaffe in the Second World War. It first flew in March 1942, was introduced in 1943, and was retired in 1945. The Me 410 was produced from May 1943 to August 1944 with a total number of 1,189 aircraft built. Its primary users were the Luftwaffe and the Hungarian Air Force. 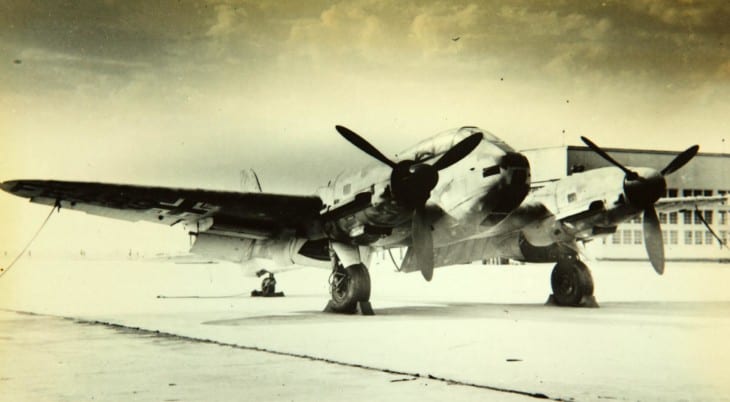 The Messerschmitt Me 410 was developed from the Me 210 heavy fighter and ground-attack aircraft. The main difference between the two was the incorporation of the bigger and more powerful Daimler-Benz DV 603A engines. It also had a longer fuselage and new automatic leading-edge slats. On March 14, 1942, it took to the air for the first time. In January 1943, aircraft deliveries started and lasted until September 1944.

The aircraft is powered by two Daimler-Benz DB 603A engines. It is a twelve-cylinder liquid-cooled supercharged inverted Vee piston engine with a gear-driven centrifugal-type supercharger, a direct fuel injection system, and a pressurized water cooling system. Each engine produces a maximum takeoff thrust of 1,750 horsepower, 1,850 hp at 6,890 feet, and 1,625 hp at 18,700 feet. It also drives a three-bladed VDM constant-speed propeller.