Bell P-39 Airacobra is a fighter type of aircraft that was produced by Bell Company for the Air Forces of the US Army during the rise of World War II. This aircraft has an extraordinary layout having an installed engine in its center fuselage. It is the most succesfull fixed wing aircraft produced by Bell. 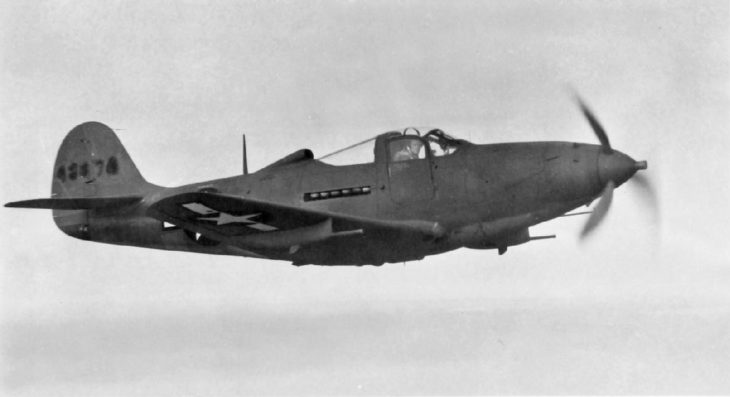 In 1937, Captain Saville, a fighter instructor in tactics at Air Corps Tactical Academy and Lieutenant Kelsey, a project officer for the fighters at USAAC or United States Army Air Corps, issued some specifications for new fighters through the Circular Proposal X-609. It was an appeal for a high-altitude type of interceptor that is single-engine. Although it is said to be an “interceptor,” the role of the proposed aircraft was typically a leeway of the traditional fighter role, utilizing more powerful and heavier aircraft at a higher altitude.

Another development that was made is the XP-39, which had its initial flight on April 6, 1938, in Ohio. With only 5 minutes of its flight, it reached a quite higher altitude which is around 390 mph at 20,000 ft. Based on the original specifications made by Saville and Kelsey, XP-39 offered a turbo-supercharger in order to enhance its performance at high altitudes. Then, Bell cooled down the turbo using a scoop on the fuselage’s left side.

P-39 Aircobra was made up of all metal with a low-wing engine fighter. It also includes tricycle undercarriage together with the Allison V-1710 V-12 engine, which is attached to the central fuselage.

Generally, P-39 Airacobra was said to be one of the 1st production fighters that are considered a “weapon system.” With this, the aircraft was highly designed to provide a platform for a 37 mm T9 cannon. This kind of weapon was designed and produced last 1934 by an American Armament Corp. This 90 inches and 200 lbs. weapon needs to be firmly attached and fire corresponding to the new fighter’s centerline. Some of the features and specifications of P-39 are as follows:

Aside from those things that were mentioned above, it also includes 500 lbs. of bombs under its belly and wings. It also has some guns like 12.7 mm of Browning machine guns on each wing, 12.7 mm harmonized Browning machines guns which are nose-mounted, and 1.5 inches of M4 firing cannon through its propeller hub.

Bell P-39 Airacobra had its first appearance on social media since it was featured in a Russian movie entitled “Peregon (Transit) last 2006. This is also an essential theme of the wartime autobiography of Edwards Park, Nanette.

Operators of the Aircraft

In the previous years, P-39 was operator by several operators. Some of them are the Royal Air Force of Australia, Air Force of Italy, Polish Air Force, and other Air Forces from different countries like the United Kingdom, United States, Portugal, and the Soviet Union.