The Messerschmitt Me 163 Komet was designed by Alexander Lippisch and manufactured by Messerschmitt as a German interceptor aircraft intended for point-defence and the sole rocket-powered fighter aircraft ever operated. It first flew in September 1941 and entered service in 1944. A total of around 370 aircraft were built. 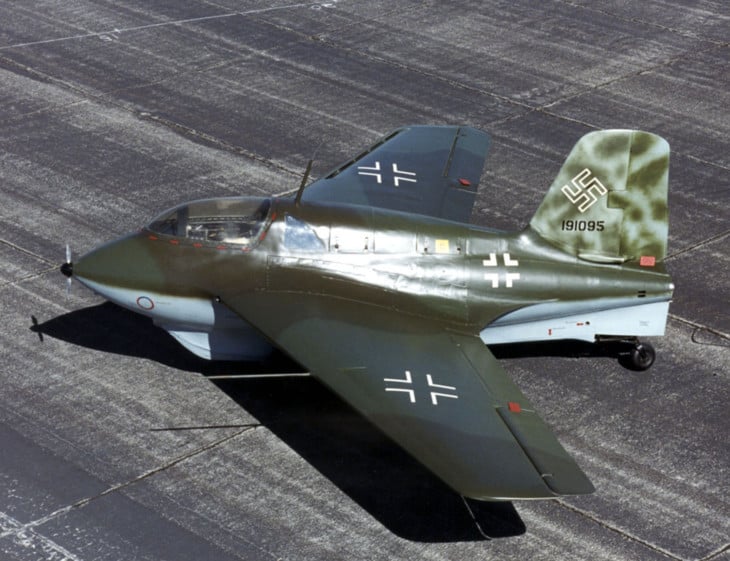 Blog posts that mention the Messerschmitt Me 163 Komet:

In 1937, development of the Me 163 Komet began. During the early 1941, production of a prototype model designated as Me 163 started. In May 1941, the initial prototype Me 163A V4 was sent to  Peenemünde to be fitted with the HWK RII-203 engine. On September 1, the aircraft took to the air for the first time. The aircraft entered service in 1944 and was operated by the Luftwaffe. The Komet boasts its excellent performance, having the record of the first operated aircraft ever built to surpass 631 mph in level flight. Several versions of the Me 163 were built.

The Me 163B-1a is an upgraded version developed in December 1941. It can carry a single crew member and was designed with a better mass-producible fuselage with an external length of 5.7 meters, an external height of 1.8 meters, and a fuselage diameter of 1 meter. It has a tail height of 2.75 meters and a wheelbase of 3.3 meters. The wingspan is 9.3 meters and the wing area is 19.6 square meters. It has an empty weight of 1,905 kg, a maximum takeoff weight of 4,309 kg, and a fuel capacity of 510 US gal.

The aircraft is powered by a single Hellmuth Walter Kommanditgesellschaft HWK 109-509A-2 bi-propellant liquid-fuelled rocket motor. It produces a maximum thrust of 3,307 lbf and a minimum of 220 lbf. The Komet has a never exceed speed of 490 knots at all altitudes, sea level to 39,000 feet and a flap limiting speed of 160 knots. The rotate speed at take-off is 150 knots and the best climbing speed is between 380 to 390 knots. It has an endurance of 7.5 minutes powered and a travel range of 44 nautical miles. It can fly up to 39,700 feet and can climb at a rate of 16,000 feet per minute.