The Lockheed F-94 Starfire was developed and built by Lockheed Corporation as a first-generation jet aircraft intended for the United States Air Force. Introduced in May 1950, it was a development of the T-33 Shooting Star subsonic jet trainer. The Starfire was an all-weather, day/night interceptor produced from 1949 to 1954. It was the first fighter of the United States Air Force fitted with an afterburner and also the first all-weather fighter powered by a jet engine that served during the Korean War. 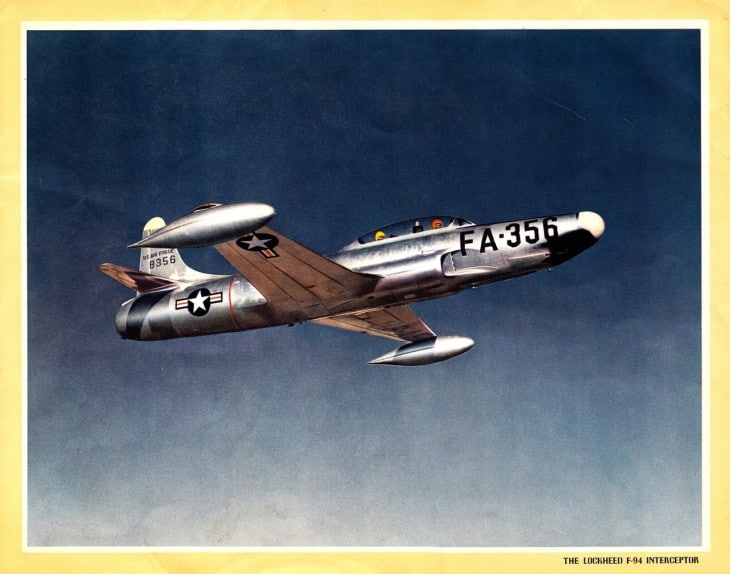 On April 16, 1949, the YF-94 prototype model took to the air for the first time. The F-94 Starfire was produced in several versions. In May 1950, the initial production version designated as F-94A entered into service. It was followed by the F-94B in January 1951.

The F-94C was a greatly improved version of the original Starfire. It can accommodate two crew members and has an external length of 13.56 meters, an external height of 3.1 meters, and a fuselage diameter of 1.4 meters. It has a tail height of 4.55 meters and a wheelbase of 5.3 meters. To enhance its performance, the version is fitted with a slimmer wing with a wingspan of 12.93 meters and a wing area of 21.63 square meters. The aircraft has an empty weight of 5,764 kg, a gross weight of 8,300 kg, and a maximum takeoff weight of 10,970 kg. The maximum payload is 800 kg and the fuel tank capacity is 1,526 US gal.

The F-94C is powered by a single more powerful Pratt and Whitney J48-P-5 engine, a license-built version of the Rolls-Royce Tay. It is a turbojet engine with water injection, a single-stage double-sided centrifugal compressor, nine interconnected can combustion chambers, a single-stage axial turbine, and a pressure spray oil system.