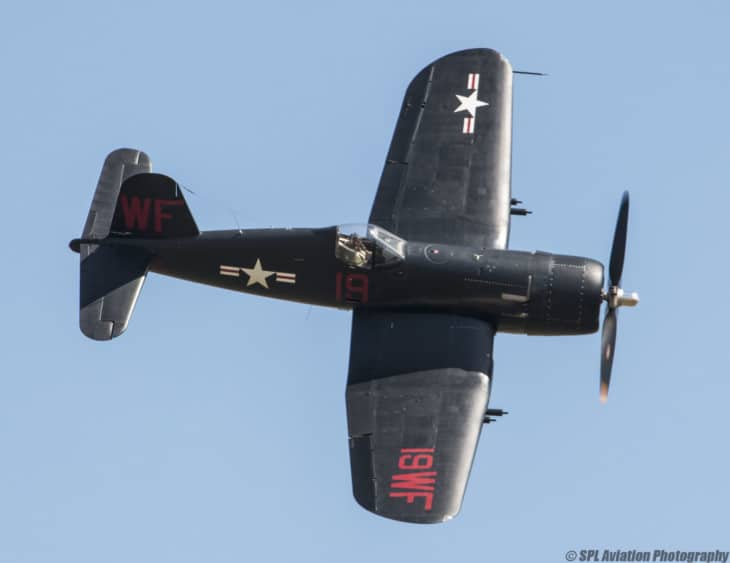 The F4U Corsair was initially designed and produced by Chance Vought before further production contracts were handed to Goodyear Aerospace Corporation. On May 29, 1940, the first prototype XF4U-1 piloted by Lyman Bullard Jr. performed its maiden flight. The F4U-1 was the first production variant designed with a distinguishing birdcage canopy and fitted with a low seating position. Several variants were also produced.

The F4U-4 is powered by a single Pratt and Whitney R-2800-18W radial engine. It is an American twin-row eighteen-cylinder radial engine with water injection, two poppet valves per cylinder, a variable-speed supercharger with fluid coupling, a Stromberg injection carburetor fuel system, and an air cooling system. It produces a maximum takeoff thrust of 2,380 hp and drives three or four-bladed propellers. The aircraft has a maximum speed of 388 knots and a stall speed of 77 knots. The normal range is 873 nautical miles and the combat range is 285 nautical miles. It can fly up to 41,500 feet and can climb at a rate of 4,360 feet per minute.

The aircraft could be armed with various weapons such as six 12.7 mm M2 Browning machine guns with 400 rounds per gun or four 20 mm AN/M3 cannon with 231 rounds per gun. It is also armed with eight 12.7 cm high-velocity aircraft rockets and/or 1,800 kg of bombs.