The Vought SBU Corsair was designed and manufactured by Vought Aircraft Company in Dallas, Texas as an all-metal biplane dive bomber. The aircraft was built for the United States Navy and was developed from the XF3U two-seat biplane fighter. It performed its maiden flight in May 1933 and had a total number of 125 aircraft built. 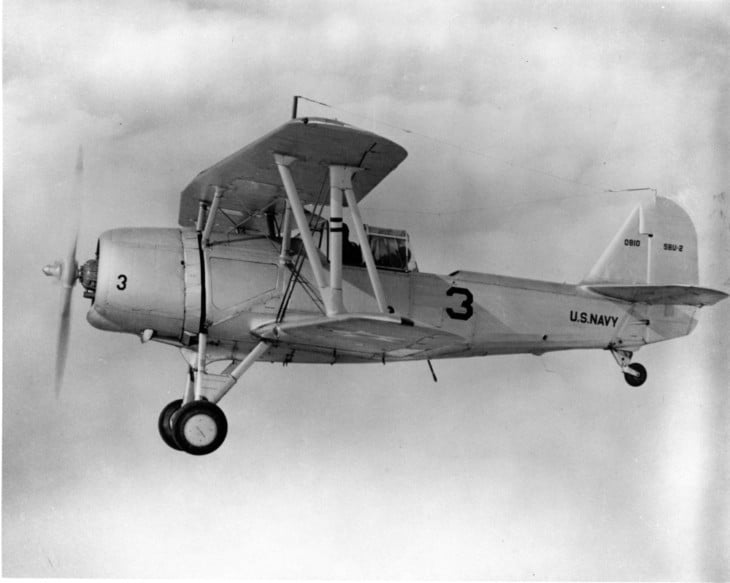 In 1934, the SBU-1 accomplished its flight tests, and in January 1935, it entered into production. In 1941, it was retired from active service. The XF3U-1 was a two-seat prototype with an engine rated at 700 horsepower. The XSBU-1 was a converted XF3U-1 into a scout bomber fitted with an R-1535-96 engine rated at 700 hp that was subsequently used as an engine test bed.

The SBU-1 is the original production order. It is a two-seater biplane with a closed cockpit for the pilot and the navigator/gunner. It has an external length of 8.49 meters, an external height of 2.7 meters, and a fuselage diameter of 1.1 meters. It has a tail height of 3.63 meters and has a fixed landing gear with a wheelbase of 5.9 meters. The wingspan is 10.14 meters and the wing area is 30.4 square meters. The aircraft has an empty weight of 1,659 kg and a maximum takeoff weight of 2,509 kg. It has a maximum payload of 420 kg and a fuel tank capacity of 14 US gal.

The dive bomber is powered by a single Pratt and Whitney R-1535-80 Twin Wasp Junior engine. It is a fourteen-cylinder two-row supercharged air-cooled radial engine with two overhead valves per cylinder, a single-speed centrifugal-type supercharger, a two-barrel Stromberg carburetor fuel system, an air cooling system, and an epicycling reduction gear. The engine produces a maximum takeoff thrust of 700 horsepower.

The Vought SBU has a maximum speed of 178 knots at 8,900 feet and a cruise speed of 106 knots. The travel range is 477 nautical miles. It can fly up to 23,700 feet and can climb at a rate of 1,180 feet per minute. The aircraft is loaded with various armaments such as a single fixed forward-firing 7.62 mm Browning machine gun and a single machine gun flexibly mounted in the rear cockpit. It is also loaded with 227 kg of bombs.