This A330neo variant focuses more towards increased travel range. With a range of 8,150 nautical miles, the A330-800neo can seat up to 406 passengers. It also features one of the shortest runway requirements among all the new generation aircraft that makes it the best fit for smaller airlines at smaller airports. 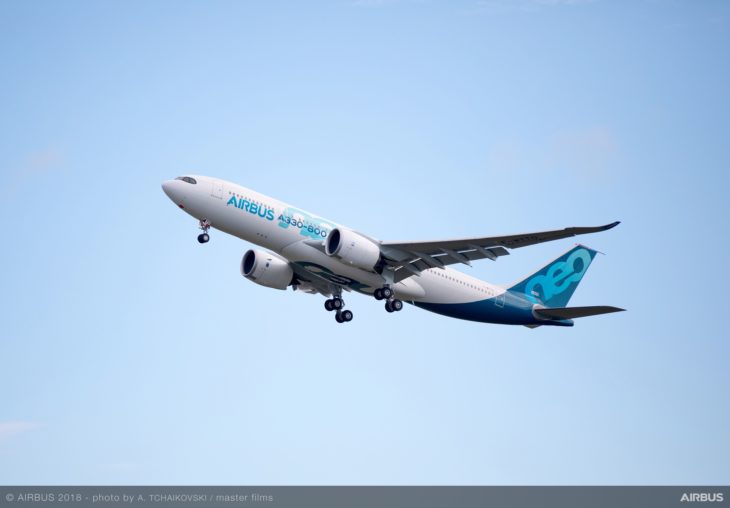 The Airbus A330 New Engine Option (NEO) was developed by Airbus as a successor and redesigned version of the A330 airliner. The major upgrades include the new engines and other minor enhancement for the aircraft’s efficiency and a few cabin improvements.

In October 2017, major structures of the A330-800neo entered into production. Installation of high-lift devices on the wing was done in Bremen, Germany while building of fuselage sections were done in Hamburg.

The center wing box that carries the structure of the wing was done in Nantes, France and titanium engine pylons that holds the heavy engine in Toulouse. Sharklet wingtips were from Korea.

In November 2017, final construction of the aircraft began.

On February 13 2020, the aircraft was awarded the European Aviation Safety Agency (EASA) certification.

Kuwait Airways signed a Purchase Agreement with Airbus for eight A330-800neo to aid the ambition of the carrier to enhance its enlarging long-haul network. On October 15 2018, the order was placed.

On April 5 2019, Uganda Airlines, the flag carrier of Uganda placed an order of 2 A330-800neo for their medium and long-haul routes.

In 2020, Air Greenland, the flag carrier airline of Greenland, signed a Memorandum of Understanding (MoU) with Airbus for the purchase of A330-800neo. The new aircraft is going to replace the current A330-200 of the airline.

The A330-800neo maintained the 58.82-meter fuselage length of the A330-200, but can accommodate six more passengers with an advanced cabin that has 18-inch wide seats for economy configuration. It has an exterior height of 17.39 meters and a fuselage diameter of 5.64 meters. It has a wheelbase of 22.18 meters.

Other enhancements include increased 64-meter wingspan with A350 XWB-inspired winglets, new engine pylons and new composite sharklets. The new version is also equipped with enhanced upper ventral fairing and wing twist for adjusting lift distribution along the wing.

The A330-800neo is designed for distance as it can land at smaller runways. It was chosen by Air Greenland because of its advantage in short runway requirements.

The cabin of A330-800neo presents the Airspace Cabin design that won a Best Product Launch award and was unveiled in 2016. The cabin has the newest fourth-generation In-Flight Entertainment (IFE) that features a fiber-optic backbone, hardwired for high bandwidth and Ultra High Definition (UHD) with 3D capable screens for passengers. It also has the updated in cabin management tools such as the Flight Attendant Panel (FAP) and Galley Inserts.

The toilets are designed in Space-Flex for more effective use of the rear cabin volume. It features the Person with Reduced Mobility (PRM) lavatories that helps to transfer the passenger from the wheelchair to the toilet seat through a tip-up seat mounted inside the lavatory. It also offers the Smart-Lav configuration, a new optimized lavatory design that provides more usable cabin length.

The cabin is the quietest in its category and has the newest Light-Emitting Diode (LED) lighting technology. It is also equipped with a unique welcome area for the passengers.

Crafted specifically for the A330neo, the aircraft is driven by two latest-generation Rolls-Royce Trent 7000-72 turbofan engines with a maximum thrust of 72,834 pounds each. It has a small, high pressure-ratio core and a fully swept wide-chord fan technology that gives it a 10% fuel consumption enhancement.