The A319neo is the shortened-fuselage variant of the A320neo family that can accommodate 120-150 passengers in two classes or 160 passengers in a high-density configuration. With its in-service advantages, this variant is equipped to deliver 15% fuel savings. 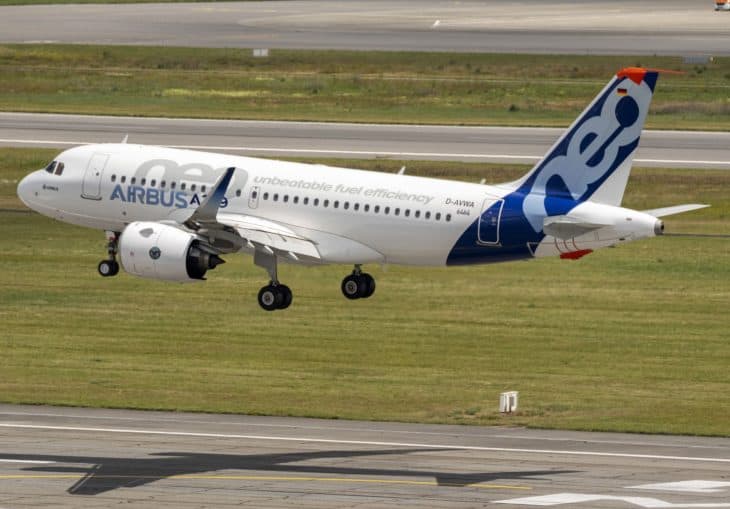 The Airbus company designed a re-engined jet-airliner known as the A320neo (New Engine Option) family, developed from the A320 with more effective turbofan engines and enhancements including sharklets.

On April 25 2019, the maiden flight of the Pratt and Whitney PWG1100G-powered Airbus A319neo took off from and landed in Toulouse, France, following the EASA type certificate in November 2019.

In the middle of 2019, there were fifty-three orders of A319neo, seventeen of those are with LEAP engines.

A few of the aircraft were ordered with LEAP engines. Avianca S.A, the flag carrier of Colombia ordered 12 aircraft. Four aircraft for an unknown Chinese operator, and a single ACJ319neo (Corporate Jet).

The thirty-six orders are composed of eight aircraft for Avianca S.A, twenty-six for unknown operators, and two orders of ACJ319neo.

The A319neo hasn’t been sold well. In January 2019, the order backlog of the aircraft was just a fraction of its competitor, the Airbus A220. Airbus made a confirmation that even though it anticipates a small number of orders due to the competition with the A220-300, the company has no plans to terminate the production of A319neo.

The A319neo has a shortened-fuselage. With an exterior length of 33.84, height of 12.11 meters and fuselage diameter of 3.95 meters, the A319neo is considered the shortest among the three variants of A320neo family.

The A319neo has merged two engines, the Pratt and Whitney PurePower PW1100G-JM and the CFM International LEAP-1A. The wing of the aircraft has a span of 35.8 meters, equipped with fuel-efficient Sharklet wingtip devices to provide fuel savings of 15%. It has a wheelbase of 11.04 meters.

The extended seating space, enhanced use of cabin area, and added exit limits let the A319neo accommodate up to 160 passengers in a high-density configuration without compromising the passenger’s convenience. It has a cabin length of 23.78 meters, height of 11.76 meters and width of 3.70 meters.

With the combination of two engines, the PurePower PW1100G-JM by Pratt and Whitney and the LEAP-1A by CFM International, the aircraft provides the utmost benefit with the slightest change. The A319neo has a maximum power of 24,100 pounds.