Developed for long and direct flights, A340-200 is the A340 Family’s shortest-fuselage member that provides cabin comfort for the passengers, possessing one of the quietest cabins in the sky for a smooth and tranquil travel. 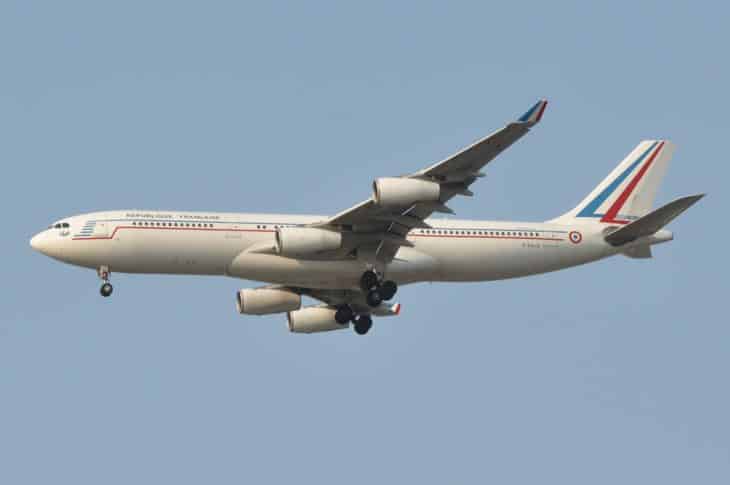 The A340-200 is designed and manufactured by Airbus as one of the A340 variants. On December 22 1992, the aircraft received its certification.

This was the first flight with no intermediate stop between Europe and New Zealand, and also the longest by an airliner during that time. The aircraft held its record for twelve years until broken by a Boeing 777 200LR in November 2005.

The aircraft has an exterior length of 59.42 meters, height of 17.03 meters and a fuselage diameter of 5.64 meters. The structure is made mainly of high strength aluminum alloy and some carbon fiber and glass fiber reinforced plastics. Usage of the composite materials resulted in decreased weight.

The flight deck was manufactured by European Aeronautic Defence and Space Company (EADS) in France, including the center fuselage and the engine pylons. Most of the parts of fuselage and the interiors are constructed by EADS in Germany.

The wing was manufactured by BAE Systems and has a span of 60.30 meters and a wing area of 363.1 square meters. The major aircraft structures such as the tailplane and leading edge slats were built by EADS in Spain and Belairbus, a Belgian aerospace manufacturer. Final assembly of the aircraft including fitting and testing was done in EADS Toulouse facility.

The A340-200 has an integrated flight deck with an enhanced layout of Liquid Crystal Displays (LCD) for simple assimilation of all necessary data. It has a 6.25 inches x 6.25 inches screen that makes eye-scanning unessential. It is also equipped with an Electronic Flight Instrument System (EFIS) that displays flight data electronically. It composes of a Navigation Display and a Primary Flight Display (PFD) which is the pilot’s primary reference for flight information.

The flight management system of the A340-200 has three multipurpose control and display units. These units supply system maintenance data both in the air and on ground. The Electronic Centralized Aircraft Monitor (ECAM) monitors and displays engine and aircraft system information to the pilot.

The flight deck features an Integrated Standby Instrument System (ISIS) that serves as a backup in case of failures. The deck has a multi-purpose printer, a Ground Proximity Warning System (GPWS) to alert the pilot if the aircraft is in immediate danger, an Aircraft Communications, Addressing and Reporting System (ACARS) that transmits short messages between aircraft and ground stations via aircraft band or satellite. It also has a Global Positioning System (GPS), Traffic Collision Avoidance System (TCAS), Satellite Communications (SATCOM), a Future Air Navigation System (FANS) and a Microwave Landing System (MLS) that assists the aircraft in landing.

The A340-200 cabin has a length of 46.06 meters and width of 5.28 meters. It can be customized in different layouts, including a three-class layout. In a first or business class layout, the seats can be configured in a six side by side setting that lets the passenger to have a window or an aisle seat. An economy class layout can have an eight abreast seating.

Driven by four CFM International CFM56-5C turbofan engines with a thrust rating of between 31,000 and 34,000 lbf, this engine is the most powerful of the CFM56 family. It has a larger fan, a fifth low-pressure turbine stage, and a four-stage low-pressure compressor. It also has a mixed-exhaust nozzle where the bypass air is mixed with the core exhaust gas that provides moderately higher efficiency.\

The aircraft has a service ceiling of 41000 feet. It has an extended range of 6,700 nautical miles.