A member of the A350 XWB family, the A350-900 is a long-range aircraft that features twin engines and a wide body. Both the wing structures and the fuselage are mostly made from a carbon fiber reinforced polymer, giving it stability and strength. 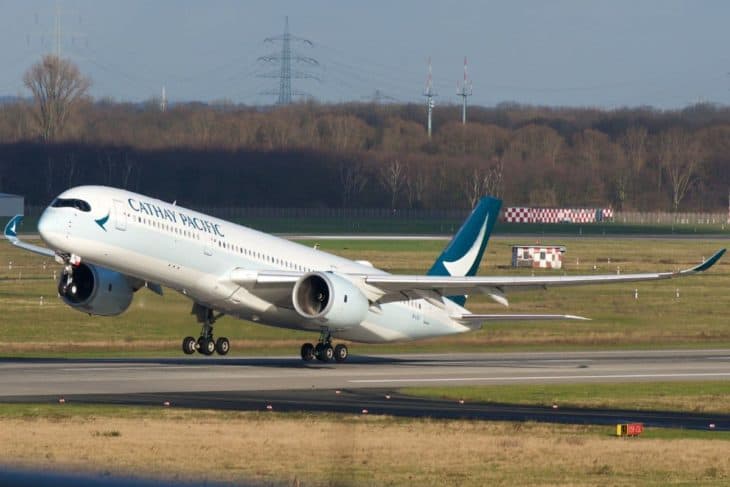 Airbus launched the A350 project in 2005 but ever since the development has gone through much turmoil which resulted in one delay after another, and with the rise of the Boeing 787 Dreamliner series and its huge popularity with many major airlines worldwide, the competition became tough like never before.

This was a time when Airbus was losing its existing customers to the 787 Dreamliner and speculations about the A350 project getting dropped also started making rounds.

This airplane was mentioned on the list of biggest commercial airplanes in the world.

A350 900 uses highly advanced and newly designed GENX Jet Engines by General Electric, these new ranges of engines promises to be quieter and more fuel efficient than the competition. Also available as an option will be the newest Rolls Royce Trent 1711 engines.

Airbus A350 900 XWB will operate with two engines giving it a max non-stop travel range of 7,500 Nautical Miles, which is very close to the current Super Jumbos, thus qualifying the A350 900 to ferry between almost every long distance popular airports internationally.

Also on operational front, the pilots used to A330 or the A380 will be readily able to fly the A350 without any additional training as it follows the same fly by wire mechanism to fly.

On the economy and construction front, the A350 promises to be 30% more efficient on fuel than the existing competition and 6% more efficient than the 787 Dreamliner – though only time will prove that.

A350 XWB will be built with the most modern methods within the facilities that currently produce the A330 and the A340. Airbus A350 uses 52% composites (carbon fiber reinforced materials), 20% Aluminum, 14% Titanium and 14% Steel and other materials for its entire construction which is kind of similar to the composition of the 787 Dreamliner.

Though they may sound over optimistic but the terrific passenger capacity and range combination on the Airbus A350 900 may well eventually turn out to be the winner, so the Dreamliner better watch out. First flight for the A350 is scheduled for 2012 and deliveries will start from 2013.

The first of the A350 models, the A350-900 has a high takeoff weight and an impressive range. Designed specifically to compete with the Boeing 787 and 777, this airplane was created to replace both the Airbus A340-500 and the A340-300. This twin-engine aircraft was designed specifically for the transport of both cargo and passengers. Out of the three members of the A350 XWB family, the A350-900 is the middle size plane.

Honeywell, Hamilton Sundstrand, Saft, and Parker Hannifin are all companies that are involved in the development of parts for the A350-900. Honeywell is in charge of the auxiliary power unit, as well as the air management system, which is used to ensure comfort in the cabin.

Finally, the complete fuel package is supplied by Parker Hannifin. They also provide hydraulic power systems for generation and distribution.

Designed to be state-of-the-art, safe, easy to maintain, and incredibly efficient, the A350-900 offers lower fuel burn, lower risk of corrosion, and easy maintenance. The wings have been redesigned to ensure that they are not only efficient, but also quiet. This means that they are highly aerodynamic and can easily cut through the air during any flight.

There have been a few variants of the A350-900, including the A350-900ULR. This plane was designed to be not only flexible, but also to have an extended range. This was made possible not due to adding more fuel tanks for additional fuel, but rather through adapting the fuel system already on the plane.

The ACJ350 is the corporate jet version of this airplane, derived from the A350-900ULR.

Finally, Airbus announced the A350 Regional. This was spurred after Boeing launched the 787-10. While the announcement was met with interest, this aircraft has not been created.

The flight deck of the A350-900 was designed to be easy for pilots to learn how to control. It has seats for up to four occupants and includes multiple instrument panels. These panels include the glareshield, overhead panel, pedestal, and main instrument panel.

Additionally, both the pilot and co-pilot have lateral consoles. There is an onboard maintenance terminal for staff.

The main instrument panel on the A350-900 features a six liquid crystal display, as well as one or two integrated standby instrument systems. The instrument panel is laid out in a way that both the pilot and co-pilot can easily see and control everything.

The cabin of the A350-900 was designed to make flying more comfortable for all passengers. This airplane features wide seats and great lighting in the cabin. Additionally, there is in-flight entertainment and WiFi. The cabin length is a comfortable 51.04 m and has a maximum width of 5.61 m.

Thanks to excellent sound proofing, the cabin is comfortable for long trips and passengers won’t experience too much noise.

The engines are provided by Parker Hannifin. These powerful dual engines are designed to provide all of the power the aircraft needs without adding too much weight. They are high-bypass turbofan and are mounted under the wings of the plane.

This powerful aircraft has an impressive range of 15,000 km. It can easily seat 325 passengers. The company claims that per seat the A350-900 has a lower manufacturer empty weight, higher fuel consumption, and higher cash operating costs than its main competitor, the Boeing 777.

Outfitted with the typical retractable tricycle landing gear, this powerful aircraft is safe during take-off and during landing. Additionally, there is retractable nose gear, designed to help provide support and balance.

The largest competitor for this powerful plane is the Boeing 787. The Boeing 777-300ER is another competitor, although the A350-900 does have fewer seats.