Previously called the Bombardier CS100, the Airbus A220-300 jetliner is a long-range passenger aircraft that can seat from 130 to 145 passengers depending on the seating configuration. 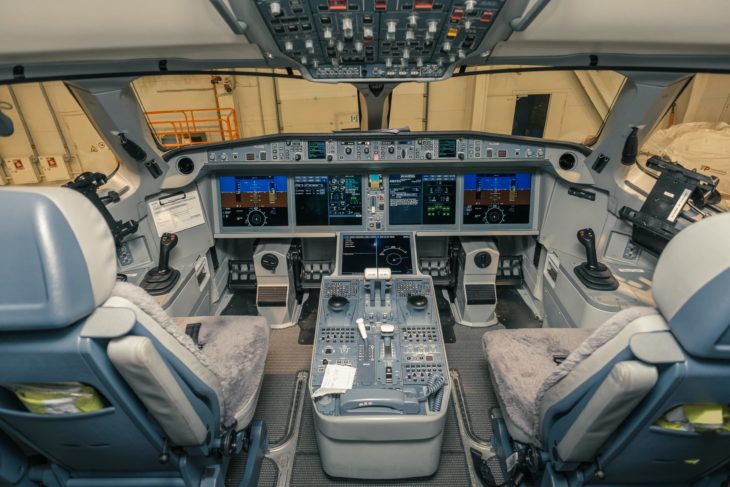 Bombardier had two major aircraft: the CS100 jetliner, which seated 100 to 125 passengers, and the CS300, which seated 130 to 145 passengers. The first flight of the Airbus took place in September 2013 at the Montreal-Mirabel Airport in Quebec. Currently, the A220-300 plane can accommodate up to 150 passengers.

The Airbus A220-300 was first manufactured in France in 2013 and it made its maiden voyage in February of 2015 in Montreal, Canada. Regarding noise, performance, and economics, the test run exceeded all expectations. When going from the 100 to the 300, the pilots and crew notice very little difference, allowing the transition to be seamless and simple.

The main difference in the two planes is the fact that the 300 seats more passengers and is a bit bigger in size. Other than that, the planes are made to be used and operated interchangeably.

The Airbus A220-300 is a 127-foot-long plane with a wingspan of 115 feet. It is roughly 38 feet high and has a sleek, modern-looking design. In fact, the A220-300 aircraft is a very aesthetically appealing plane. Its aerodynamic advancements include advantages such as less noise footprint, decreased emissions, and 20% lower fuel burn, making it both an attractive and eco-friendly aircraft.

One of the biggest advantages to flying the A220-300 airplane is that it is almost exactly the same as flying the A220-100, which means the transition from one to the other is very simple for both pilots and crew members. The flight decks of the two planes are almost exactly alike, making it easy to go between the two types with ease.

The cabin in the A220-300 includes advantages such as ample overhead storage, excellent headroom that isn’t affected by opening those compartments, and two flex zones, which means that the cabin can be customized when it comes to stowage areas and partitions.

The cabin is also conducive to passengers being able to enjoy mood lighting and various entertainment offerings. In fact, due to these and numerous other advantages, the Airbus A220-300 offers an unparalleled experience for the passengers of the plane.

The Airbus A220-300 runs on specifically designed Pratt and Whitney PurePower PW1500G geared turbo fan engines, providing a more economically designed aircraft that delivers less fuel burn per seat than most other aircraft. In fact, the safety and economic savings in using these types of engines are perhaps their biggest advantages and likely why the 300 series chooses to use them.

Some of the assets of the Airbus A220-300 include rotating overhead storage bins, larger windows than most other aircraft, a higher percentage of composite materials, and lower seat-mile costs as well as lower CO2 emissions and therefore a reduction in maintenance costs. The 300 aircraft is six tons lighter than the A319neo, one of its major competitors, and saves up to 20% of the fuel costs over that particular plane.

The PW1500G engines mean that the 300 suffers no startup or bearing problems that other aircraft must contend with, allowing for a more efficient overall performance. The plane is a lean aircraft that is both efficient and very economical, making it a great choice for both the passengers and the flight crew. All of the planes in the A220 series are recognized for their low noise levels and their quiet, very comfortable cabins.