A wide-bodied passenger jetliner that is designed for long-range use, the CS300 offers impressive fuel consumption with an improved performance, making it a welcome addition to the skies. It can easily accommodate between 130 and 145 passengers, as well as two flight crew. 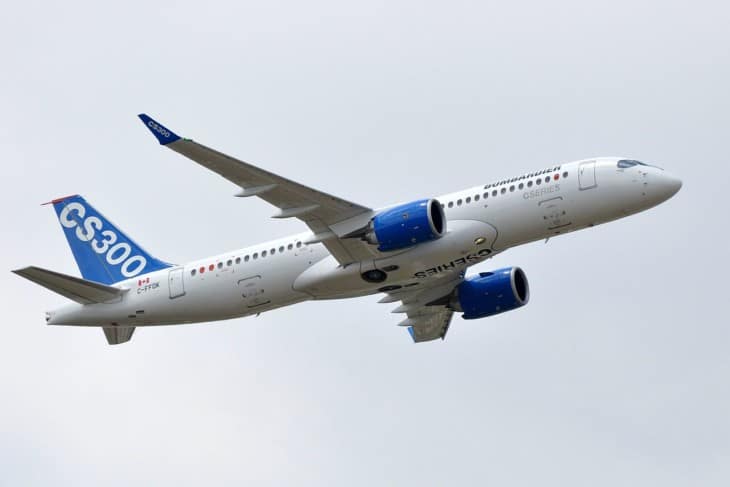 The Bombardier CS300 is now known as the A220-300. This is a powerful passenger jetliner designed for long-range trips. It was originally designed by the Bombardier Group and offers great fuel consumption and a lower operating cost.

While the CS300 was first designed and developed by Bombardier, in 2018 it was officially taken over by Airbus and renamed. Bombardier, as well as the Quebec government, stayed as minority shareholders along with Airbus.

In early 2010, Republic Airways Holdings placed an order for 40 of these jetliners with an included option for 40 more. This was the first US customer to purchase the CS300.

A contract in March of 2009 for 17 CS300 from Lease Corporation International Group helped grow the CS300’s reputation.

Improved aerodynamics of this aircraft combined with the incredible engines ensures that it burns less fuel and has greatly decreased emissions.

This aircraft has an advanced flight deck that easily accommodates a pilot and a co-pilot. It has a state-of-the-art, fly-by-wire system that features LCD displays, envelope protection, and side-stick controls. It also has weather radar, as well as an automatic dependent surveillance-broadcast system.

Additionally, the flight deck has an electronic flight bag as well as a dual or single head-up guidance system. This impressive flight deck allows pilots and co-pilots to feel in control of the aircraft and to ensure safety when in the air.

One of the most impressive things about the CS300 is the large and comfortable cabin. It’s designed with multiple configurations to ensure that all commercial airline requirements are met. There are three divisions in the cabin. Dual class, as well as standard single class and high-density single class, are all available.

The dual-class offers 120 seats, while the standard and high-density class offer 130 and 145 seats. There are between three and five crew members to help passengers.

Galleys and lavatories make up the rest of the aircraft and ensure that it is versatile. Wide aisles, comfortable shoulder space, and huge windows improve the passenger experience.

A great cabin management system ensures that the aircraft crew can easily help passengers and ensure complete control over the interior environment, such as mood lighting and entertainment offerings.

The power of the CS300 comes from the engines. Dual Pratt & Whitney PurePower PW1000G engines offer plenty of thrust and power. Each provides 93.4 kN thrust. They feature an engine health displaying system and low pressure turbine on each engine.

The engines feature advanced drive gear system technology to ensure that the airplane is as fuel efficient as possible. This ensures that the noise and the operating cost of the engines is reduced greatly.

This powerful aircraft can easily reach a max altitude of 12,497 m. With a normal cruise speed of 829 km/h and a maximum speed of 871 km/h, it easily and quickly reaches its destination, as long as it is within the range of 5463 km.

Liebherr is contracted for the landing gear, as well as for the pneumatics.

Some of the greatest competition for this aircraft comes from Airbus. The A319, as well as the A320, are both similar aircrafts that are still in production, even though they are commonly thought of as the main competition for the CS300.

Another competition is smaller versions of the Boeing 737, which has a great reputation for providing incredible flights and service.

This aircraft costs around $3100 per hour to operate.

After the acquisition of Bombardier by Airbus this aircraft is now better known as the Airbus A220-300.