Part of the CSeries aircraft family, the CS100 was originally designated as the C110. It easily seats 110 passengers, but is available in a few different configurations, making it a great option for both longer and shorter flights. With a concept phase beginning in 2004, this aircraft has a lot to offer. 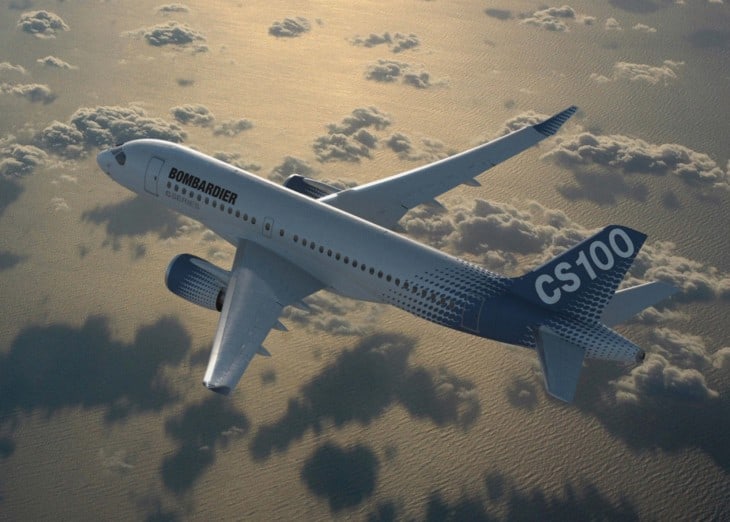 Available in both a standard and an extended range configuration, the CS100 is great for short haul flights, as well as for transcontinental flights. The short haul flights have a range of up to 2200 nm, while the longer flights can easily reach 2950 nm. It is now known as the Airbus A220-100.

The CS100 was designed specially to meet the needs of companies needing flights with 110 seats. In 2004, Bombardier started a program to evaluate whether or not a new family of commercial aircraft would be feasible and if it would be a good idea. This lasted until 2006, but in 2005 Bombardier began to offer the CSeries aircraft to customers. The idea was scrapped in 2006 due to low interest, but was picked up again in 2007.

Ground-breaking ceremonies in Mirabel in September 2009 marked the start of a new testing proving facility for the CSeries aircraft.

The launch customer of the CSeries planes was Lufthansa, and in 2008 they issued a letter of interest for 60 aircraft, as well as 30 additional options. Each of them costs $46.7 million. In early March 2009, there was another order for 30 aircraft from Swiss International Air Lines Ltd.

Another contract was signed in March 2009 for three more CS100s.

Nearly one-fifth of the weight of the aircraft is from composite construction. There are composite materials in the rear and center sections of the tail cone, fuselage, wings, and empennage. Additionally, this aircraft boasts a fourth generation wing design.

With impressive electrical systems that ensure low operating cost and weight, this aircraft has been designed to be not only easy to control, but also less expensive to fly and maintain. It is similar to the CS300 in terms of training, operating, and maintenance.

There are passenger doors at both ends of the cabin, which reduces the amount of time spent loading and unloading.

As is common with new aircraft, the flight deck boasts fly-by-wire systems, as well as conventional controls. The fly-by-wire control ensures that the aircraft has as low a weight as possible and that it also enjoys great fuel efficiency.

This powerful flight deck makes it easy for the pilot and co-pilot to control the plane, check its status, and to ensure that the operation is as fuel efficient as possible. With such a powerful digital flight deck, it’s easy to see why the CS100 is thought to be a great option.

Updated features in the cabin ensure that passengers will be as comfortable as possible when they are in the aircraft. New lighting and better windows allow for a pleasant experience. Passengers sit five across with a center aisle. The business class seats are just four across and have power outlets, in-flight entertainment, and internet.

Each passenger enjoys 2.6 ft3 of storage in the overhead compartments, while everything else can be easily stored in the cargo compartment, which boasts 830 ft3 of usable volume.

Powerful Pratt & Whitney PurePower PW1000G engines power the plane. There are two of them, and they are designed to be incredibly reliable and to use less fuel. Thanks to the reduced emissions, fuel consumption, and noise that they produce, they offer all the power the plane needs. In fact, they boast a thrust of between 17,000 and 23,000 lb.

The CS100 can easily land and take off from a shorter landing strip than other similar aircraft. It only needs 1643 m for take off and can easily land on just 1387 m. With a fuel capacity of 21,918 l and an impressive ceiling of 12,497 m, this plane is a great option for flying.

The landing gear on any aircraft is important, and the CS100 has retractable tricycle-type gear. The nose unit retracts rearward while the main units retract inward. Each unit has twin wheels on it to ensure easy landing and take off.

The CS100 was renamed the Airbus A220-100 in July 2018, when Airbus took over the company. The direct competition for this aircraft is the Boeing 737-700, as well as the Airbus A319. So far, it is less expensive than the competition, but has not been in service nearly as long as the other aircraft.