The Bombardier Challenger 350 is a mid-size business jet designed to access more airports than other competitor in its category. Its cabin cross-section is almost identical as those of large cabin long-range aircraft that makes it one of the most capacious cabins in its class. 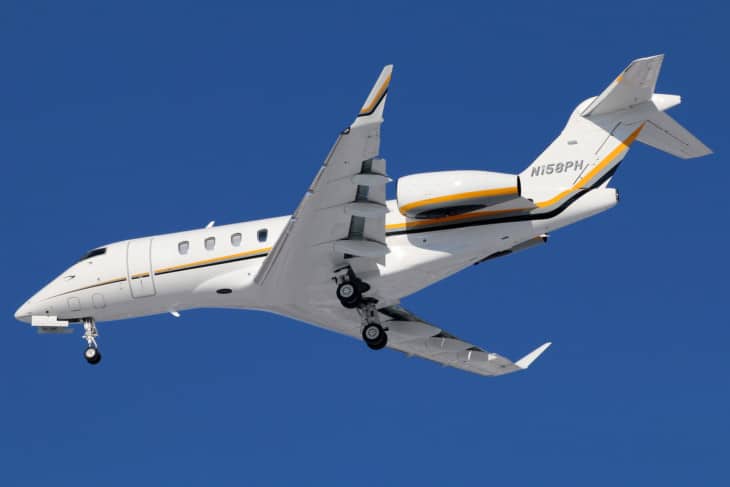 The Challenger 350 is a mid-size business jet designed and manufactured by Bombardier Aerospace. The improved variant made its maiden flight on March 2 2013.

In May 2013, the aircraft was announced at the European Business Aviation Conference and Exhibition (EBACE) in Geneva, Switzerland and scheduled to enter service next year.

In November 2015, Flexjet, an American provider of fractional ownership aircraft, leasing, and jet card services signed a memorandum of understanding (MOU) with Bombardier for 20 units of Challenger 350.

The Challenger 350 has an exterior length of 20.9 meters, a height of 6.1 meters and a fuselage diameter of 2.2 meters. Its 21-meter wing features canted winglets that helps to increase aerodynamic performance. These winglets have less acute angle that reduce the wingtip vortex and the associated drag by deflecting the air that wants to escape over the tip back down.

The Challenger 350 is created for higher fuel-efficiency and longer-range capability. It is also intended to reduce downtime and features lowest direct operating cost through longer maintenance intervals and low parts cost.

The Challenger 350 features the quietest cabin with a 7.68-meter length, 2.19-meter width and 1.83-meter height. It is designed to minimize noise and maximize comfort because of its ultra-quiet ambiance.

Furnished with a standard entry door acoustic curtain and a galley pocket door, the sound of aircraft suppressing design provides an excellent productivity and comfort during flight.

The aircraft can seat up to a maximum of eight to ten passengers. These reclinable seats can be reclined at 180° to a fully-flat position for a more convenient relaxation.

The Challenger 350 cabin also features an integrated nice high-definition Cabin Management System (CMS). By using the CMS applications, personal electronic devices can be accessed. It has communications and entertainment in a single control at every seat, and two 22-inches high definition bulkhead monitors.

The aircraft cabin has a Lufthansa niceview 3D moving maps which provides worldwide, high-resolution 3D maps and virtual flights designed to create the ultimate flight information and viewing experience. It is also equipped with wi-fi connection and Iridium satellite phones.

Other avionics include Traffic Collision Avoidance System (TCAS) that serves as an aircraft collision avoidance system designed to reduce the incidence of mid-air collisions between aircraft.

The Challenger 350 is powered by Honeywell HTF7350 that has 7.3% improved take-off thrust with 7,323 lbf maximum power. Its hot-section modification and Full Authority Digital Engine (or electronics) Control (FADEC) gives it the same flat rating, strength, and accuracy.