Announced in 1995, the CRJ200 was used to replace the CRJ100. These aircraft were originally manufactured between 1991 and 2006, and was Canada’s second civil jet airliner. They are now manufactured to be used as the airframe for the Challenger 850 executive and shuttle jet. 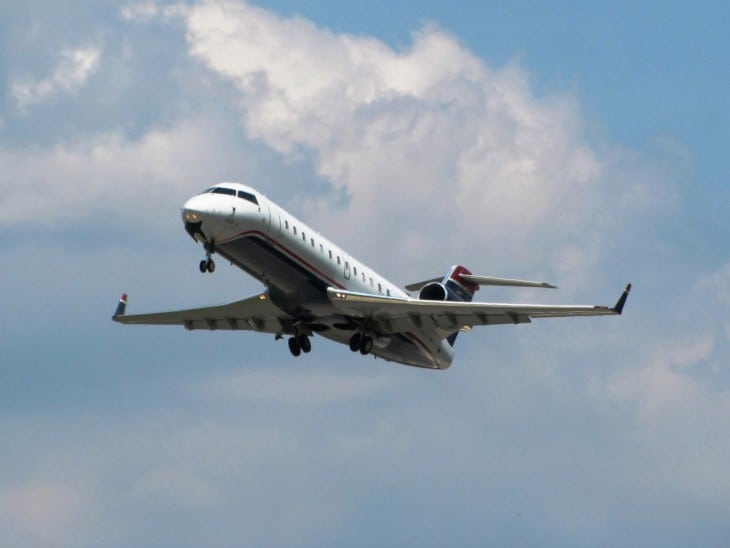 First designed to replace another jet, the CRJ 200 is now used as the airframe for the Challenger 850. This powerful and comfortable jet is designed for flight in all conditions, thanks to its durable design and attention to detail.

This aircraft was first introduced into service over 20 years ago, in 1996. It was designed as a replacement for the CRJ 100. By January of 2006, there were 709 of the CRJ200 jets produced and delivered to companies around the world.

There was a temporary suspension of CRJ 200 production from October 2005 to January 2006. Production was picked back up in April of 2006 so that the company would be able to meet the demand for the upcoming Challenger 850 jet.

This aircraft is mostly used by Delta Connection, who operates more than 230 of these jets. Lufthansa, Air Wisconsin, Atlantic Coast Airlines, and other airlines also use the CRJ 200.

After signing a contract with West Air Europe of Sweden, Bombardier created the CRJ 200PF – a package freighter that was converted from the CRJ 200 configuration.

The design of this aircraft is based on the design of the Challenger 604 business jet. It’s made for regional flights and it is loaded with powerful engines, giving the plane a great range of 3050 km. Transonic wings that are fitted with winglets ensure that the aircraft is efficient and incredibly high speed.

A semi-monocoque design fuselage and long cabin make the aircraft comfortable. There is a rear baggage area on the CRJ200 that provides 9 m3 of space. Both the baggage compartments and the cabins are air conditioned and pressurized.

The flight deck on the CRJ200 is impressive. It is fitted with a Rockwell Collins Pro Line 4 flight and information system. It also features a crew alerting system and an engine indication. With instrument displays that show flight displays, as well as multifunction displays, pilots can easily keep an eye on the aircraft.

The dual automatic flight control system makes flying this aircraft easier than ever and also ensures that pilots can enjoy better fuel mileage and lower costs of flying. With a dual VHF nav and comm radio, pilots can easily connect with others in an emergency. The electric de-icing systems keep the cockpit side windows and windscreen free from ice in bad weather.

Some versions of the CRJ200 have been outfitted with a different 44-seat configuration and have closets located in the forward area of the cabin. These modifications are not very common anymore. With four passengers in a row and a center aisle splitting them down the middle, it’s easy for all passengers to get a great seat on the flight. The seats are all 44 cm wide.

There are two GE high-efficiency CF34-8C1 turbofan engines on the CRJ200. They offer 56.4 kN thrust during take off and an impressive 61.3 kN thrust with the auto power reserve function. Additionally, they are equipped with thrust reversers that are pneumatically operated.

Bombardier Aerospace provided the engine nacelles that are mounted on the sides of the fuselage rear section.

Each of the two integral wing fuel tanks have a capacity of 5300 l, and there is an optional wing tank that can be used to increase fuel capacity by 2m789l.

The normal cruising speed of the CJR200 is 785 km/h. When high-speed cruising is engaged, then the aircraft can easily reach 8600 km/h. With a service ceiling of 12,496 m, this aircraft can quickly reach a high altitude and enjoy great cruising.

This powerful aircraft requires a landing strip that is 1920 m for take off and one that is only 1480 m for landing. This is quite impressive given the size of the CJR200. It has a turning radius for a 180-degree turn of just 75 feet.

The CRJ200 has Dowty retractable tricycle-type landing gear. This gear has been equipped with multiple durable Aircraft Braking System wheels, as well as disc steel brakes.

They have Goodyear tires, as well as Hydro Air mkIII units for anti-skid protection. The nose unit retracts forward and the main gear retracts inward.

One of the CRJ200’s competitors is the Embraer ERJ 145. There are also smaller Embraer models that are often thought of as being competition, but they aren’t quite as large as the CRJ200. These include the ERJ 135, 140, and the Fairchild Dornier 328JET.