This powerful regional jet is a great option for passengers and airlines looking to improve their time in the skies. It first entered into service in 1999 and has 95% parts commonality with Embraer’s ERJ 145, a slightly larger version of this powerful jet. 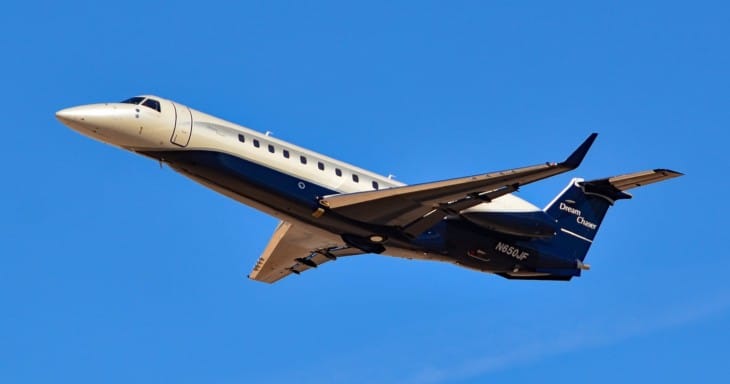 Designed to have the perfect balance between capacity and frequency of flight, the ERJ 135 is a small but mighty aircraft. It was designed to ensure that airlines using this jet remain profitable and competitive by allowing larger jets to be deployed on profitable routes while this smaller option filled the gap to allow passengers plenty of flights to choose from during the day.

Multiple high-quality companies worked together to provide all of the components and systems that this aircraft needed. An air-conditioning system from Hamilton Sundstrand air conditions and pressurizes the baggage compartments as well as the cabin.

EROS supplied the oxygen system, and Sonaca of Belgium provided the pylons. The engine nacelles and optional thrust reversers are from International Nacelle Systems.

In July 1999, this aircraft entered into service with both American Eagle and Continental Express. The jets are currently in use by Luxair, Flandre Air, City Airlines, British Midland, and more.

ECC Leasing leased four of these jets to South African Airlink in early 2010, and they will be based in South Africa for regional flights.

The great thing about the ERJ 135 is that it shares so many parts in common with other aircraft in this series. This means that it is fairly easy to update and maintain. The facilities in Sao Paulo are where the testing, assembly, and full systems integration all take place.

The center and rear section of the fuselage are supplied by Sonaca of Belgium, while the nose radome is provided by Norton. Gamesa of Spain supplies the wings.

With low mounted swept wings, a circular cross section fuselage, and aluminum leading wing edges, the ERJ 135 is a durable aircraft. An aluminum box T-tail as well as aluminum on the leading edges of the tailplane improve cruising.

A Honeywell Primus 1000 avionics suite is located in the cockpit. There are also ground warning systems, collision avoidance systems, and even a heading and reference system. A display that provides info on landing and various multifunctional displays provide all of the information that the pilot needs when flying this plane.

Additionally, companies can opt for a GPS and flight management system to be placed in the cockpit. There is also a color weather radar and communications suite.

There are two Rolls-Royce engines that are mounted on pylons on this aircraft. The engines are fitted with impressive digital engine control and the air intakes come with an anti-icing system to prevent failure during a flight. The AE 3007A Rolls Royce engines are rated at 31.3kN, while optional AE 3007A1 engines offer 15% more power.

There is a fuel management system from Parker Hannifin. Additionally, Smiths provided an electrical system and auxiliary power unit mounted on the tail.

This powerful jet can easily reach a max speed of 955km/h, although the cruising speed is a bit lower, at 833km/h. it has a range of 3,200 meters, making it a great option for domestic travel.

The main competitors for this powerful jet come from Bombardier. Their entire line of CRJ regional jets is considered to be the main competition for the ERJ family of jets. This is because these jets are very similar, offer similar seating for passengers, and cost around the same to operate, although they are a bit more expensive in terms of cost per block hour.

The ERJ 135 has a reported average operating cost of just around $727. This makes it one of the most affordable options that airlines can opt for and one that will quickly start to provide a great return on investment.