The powerful Embraer 190 took its first flight in March 2004. Since then, it has become a familiar and welcome addition to the skies as it flies with JetBlue. It’s thought to be one of the best jets for operating at restriction-sensitive airports. 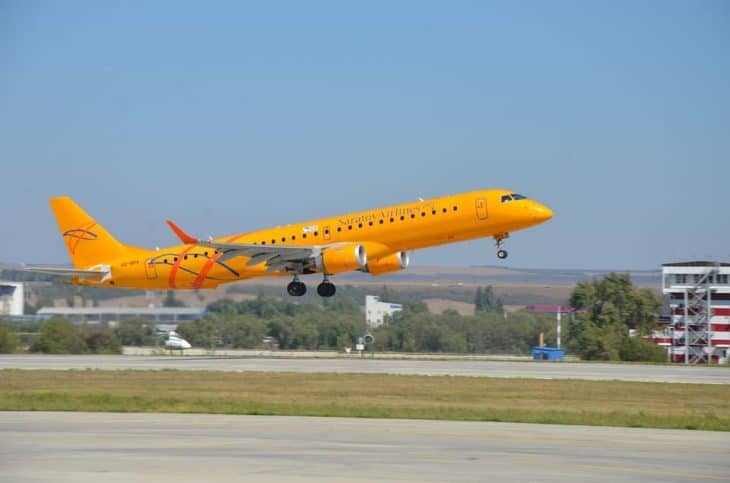 The Embraer 190 is a commercial jet that can hold 98 passengers. Designed by Embraer of Brazil, it joins other great planes as a part of this line. Launched in June 1999, it wasn’t until March 2004 that it took its first flight, however, thanks to its great development and impressive design, it’s a comfortable and excellent jet for taking to the skies.

This commercial jet was developed thanks to a partnership with C&D, Sonaca, and Liebherr. These heavy hitters in the aerospace contracting world joined forces to work together in Brazil for high-quality local production. The main site in Sao Jose dos Campos is the spot of some of the original test flights. In fact, the company constructed a 95 m wide and 5000 m long runway for this use – the longest one that is currently in South and Central America.

An advanced range version of the jet was announced in early 2005. This features improved reinforcements throughout the jet, allowing for higher weight at landing and at take off. Not only that, but these advanced jets have an improved range. They do, of course, come with a higher price tag.

In early 2014, Embraer had delivered 500 aircraft to a variety of customers, including Air Canada, Air France subsidiary Regional, Virgin Blue, NAS Air of Saudi Arabia, and TAME of Ecuador.

June 2008 saw a dual order for these jets. They were delivered in September and December of 2009. In 2010, they received a new order for 20 jets from Austral Lineas Aereas.

Shortly after companies began ordering this jet, more and more followed. They quickly began shipping the Embraer 190 all over the world, with companies ordering jets and placing options for additional aircraft.

One impressive thing about the design of the Embraer 190 is that virtual reality and modelling were used extensively to help design it. Embraer handles the assembly of the 190. It has a low-wing design with twin engines under the wings. These have winglets to improve lift and decrease drag.

An all-moving tailplane from Gamesa of Spain provides great control and power. Gamesa also creates the rear fuselage. Embraer handles the design and manufacturing of the forward and center fuselage, while Hamilton Sundstrand is in charge of the tailcone.

An all-digital cockpit graces the Embraer 190, and the jet features a lightweight and modular avionics suite. It boasts five liquid crystal color displays.

Additionally, the jet has fly-by-wire flight control. This means that it is primarily controlled by computer, except for the ailerons. Part of the benefit of this digital flight deck is that it does such a great job perfectly controlling the aircraft and ensuring that it not only works correctly, but also that the operation costs are as low as possible.

Thanks to the double bubble type cabin, this jet has a larger width, as well as improved access to overhead bins. The full height in the cabin is 2 m. It was designed by C&D Interiors, and all passengers are seated four across.

The twin underwing engines are both GE 34-8E-10 turbofan engines. They have ratings of 82.28kN and are supplied by EG. Additionally, they boast reduced fuel consumption, as well as lower maintenance needs thanks to the computerized system. The Parker Hannifin fuel system manages 13,000 kg of fuel.

This jet has a max range of 4260 km and can easily operate in restriction-sensitive airports. The take-off field length is 1463 m, and the landing is 1280 m. Thanks to quiet and efficient engines, this jet easily meets all noise requirements. Additionally, the jet has a very fast turnaround time thanks to rapid boarding and deplaning and just 10 minutes for refueling.

The jets each have twin wheels that are on Liebherr retractable landing gear.

This jet has a few competitors in the market. The Airbus A220 is often compared to this great jet. Additionally, while it is typically very difficult to break into the Bombardier market, this jet has been directly compared to the Bombardier CS100.  Others have drawn comparisons between it and the Boeing 737, but the Boeing is significantly larger and carries many more passengers than the Embraer is able to.