This powerful medium range passenger jetliner is one of the favorites from Embraer of Brazil. In fact, it is the largest aircraft that they manufacture as a part of the Embraer E-Jet family. The extended version of the E-190 is available in a few configurations. 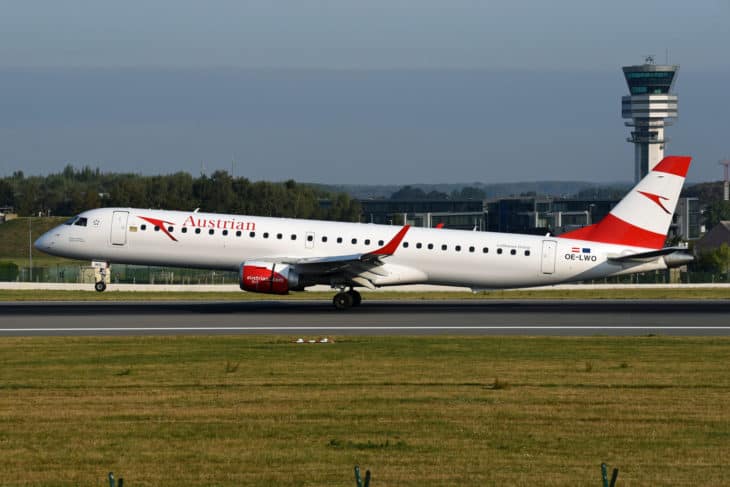 The maiden flight of the Embraer 195 was completed in late 2004 and it was able to enter service almost two years later, in 2006. This jet was certified just a few months before by the Brazilian Aviation Authority, and one month later by the European Aviation Safety Agency. It took a whole year, in August 2007, for the jet to receive its certification from the Federal Aviation Administration.

This jet is available in three configurations – standard, long range, and advanced range.

By working with top companies to provide all of the parts and pieces required for the 195, Embraer has managed to create a reliable and durable jet that is long-lasting and designed for impressive performance.

As of March 2014, Embraer had received 145 firm orders for the 195, as well as 22 options. They had delivered 129 by that date. The launch customer for the 195 was Flybe, who ordered 14 jets with 12 more as an option. The order was placed in mid-June with deliveries beginning in September 2006.

Lufthansa CityLine, Air Colomiti, Augsburg Airways, LOT Polish Airlines, Azul Linhas, Aurigny Air Services, and Belavia Belarusian Airlines all placed orders for the 195. Some of these orders contained options for additional orders in the future if the airline was happy with the way that the 195 looked and operated.

This jet is a low-wing, monoplane design, and can easily operate both night and day in both international and domestic air routes, carrying 12,971 kg of fuel. Equipped with a Parker Hannifin fuel system that is durable and reliable, this jet is easy to refuel.

The Hamilton Sundstrand power unit provides the electricity to the jet.

Like other Embraer jets, the 195 has an all-digital flight deck. There are two crew members on the flight deck, which is equipped with an impressive multifunctional display, primary flight display, control unit, audio control panel, and Honeywell Primus EPIC flight instrumentation system.

Additionally, the flight deck hosts a fly-by-wire electronic control system. This allows the pilots to relax for some time while in the air, as the jet can easily perform autopilot missions without requiring hands-on help 100% of the time.

There are other great avionics installed in this jet to make it function correctly, including a crew alerting system and engine indicating. These, in conjunction with navigational compass, engine panels, and an air data computer, make the flight deck not only advanced, but also reliable and ensure that the pilots have all of the information they need when flying.

This jet features a double bubble fuselage design that provides more space and comfort to all passengers on the flight. The cabin is incredibly spacious and can easily fit between 108 and 124 passengers. There is a center aisle and the passenger seats four across.

Baggage space on the 195 is below the seating area, which is unlike storage in conventional aircraft. The height of the cabin is a standard 2 m and it is 2.74 m wide and 28.17 m long. Baggage volume is 27.17m3.

The Parker Hannifin tricycle type retractable landing gear is durable and reliable, providing all of the security necessary during take off and landing. This is not the first time that Embraer has used this type of landing gear on their jets, as it has a great reputation for being reliable.

A few of the main competitors for Embraer include Bombardier, Gulfstream, Airbus, and Dassault. In particular, the Airbus A220 is often considered to be one of its biggest rivals. Additionally, the Bombardier CRJ-900 and CRJ-1000 are also considered to be top competition.