The first member of a new line of Embraer commercial jets, the Embraer 170 is the smallest in this family. While it can transport 70 passengers, other jets in the family can easily transport 78, 98, and even 108 passengers, but they are all held to the same high standards. 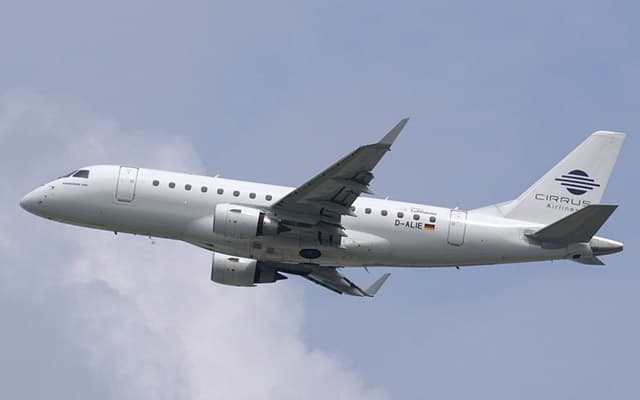 The Embraer 170 is designed for excellent performance and operational efficiency. This aircraft was designed for space and comfort, yet being the lightest of the Embraer E-Jet family, low fuel consumption and low operating cost.

First launched in June 1999, this impressive commercial jet took its first flight in early 2002. By June 2002, five of the six test aircraft had taken a flight. These were all performed in Sao Jose dos Campos, Brazil, as well as from the Gaviao Peixoto center. This is where Embraer built the longest runway in Latin America. At 5000 m long, it’s got the length necessary for test flights.

It was developed through an impressive partnership with 22 main suppliers and 16 risk-sharing partners. While Embraer is responsible for actually designing and developing this powerful jet, as well as manufacturing the fuselage center section, forward fuselage, fairings, and wing assembly, they worked with a lot of other companies who provided structural sections of the aircraft. These companies included Sonaca, Kawasaki Heavy Industries, and Gamesa, among others.

With the help of multiple powerful and impressive companies, the 170 quickly became a reliable jet. The passenger cabin, as well as the cargo compartment interiors, are supplied by C&D Aerospace. Engines and nacelles are supplied by General Electric while Hamilton Sundstrand has a huge role to play in production. They provide the electrical systems, tail cone, air management systems, and auxiliary power unit.

Honeywell provides the avionics, Liebherr is in charge of the landing gear, and Parker of the USA provides the fuel system, hydraulics, and flight control. These companies all created Brazilian subsidiaries to locally manufacture parts.

A newly constructed 16,000 m2 facility was created for the assembly of the jet, which has room for eight jets under construction at the same time. There is also a 4000 m2 painting hangar.

Even though the aircraft had been in the works and in testing for a while, it wasn’t until February of 2004 that it received European, Brazilian, and US certification. The first aircraft was delivered in March of 2004 to Alitalia and entered service in the same month.

Some of the customers for this jet include British Airways City Flyer, Republic Airways Holdings, Air Caraibes of Guadeloupe, and TAME of Ecuador.

As of 2017, the E170 was largely out of production. The reason for this being that it lacks most of the performance upgrades the E175 received. The E170 is also slightly less versatile in terms of seat configuration.

Both virtual reality and digital modeling were used to design this jet. With more than 2000 hours of wind tunnel tests, the end result is a low-wing design jet that has podded engines below its wings. Winglets on the wings reduce any drag and provide better lift and improved efficiency.

The double bubble fuselage allows for more room for passengers in the cabin. Extra room at the shoulder and feet, as well as better access to overhead bins, is provided.

One thing that Embraer does well is the all-digital cockpit. This avionics suite has an impressive Honeywell Primus Epic Electronic Flight and Information System. This system boasts five liquid color displays, making it very easy to read.

All flight controls are fly-by-wire technology, except for the ailerons, which is standard for Embraer jets.

C&D Interiors designed the interior cabin. It seats 70 passengers four across and has an 81 cm seat pitch.

The engines of the 170 are mounted under the wings, as with their other jets. They are both CF34-8E engines that are rated at 62.28kN. General Electric supplies the engines as well as the nacelles, which are then controlled by the full authority digital engine control. This is a redundant system that ensures optimization during flight, lowering fuel costs and decreasing the amount of maintenance that the jet requires.

The Parker Hannifin fuel system carries 9.470 kg of fuel. The long range variant of the 170 has additional fuel tanks that are located in the baggage compartment to allow for taking more fuel on the flight.

This jet has a range of 3889 km. It can easily connect from cities such as Paris to Moscow and Dallas to Halifax. With high-efficiency engines that are designed to be quiet and reduce emissions, the 170 can easily operate at airports with operational restrictions. It boasts 10-minute refueling, as well as rapid deplaning and boarding, thanks to doors on both sides of the fuselage.

As with so many other Embraer jets, the 170 is fitted with twin wheels. The landing gear is from Liebherr, and is a reliable, retractable, tricycle-type landing gear that is durable and built to last.

One of the main competitors for this powerful jet is the Saab 340. It is also regularly in competition with some Airbus jets.